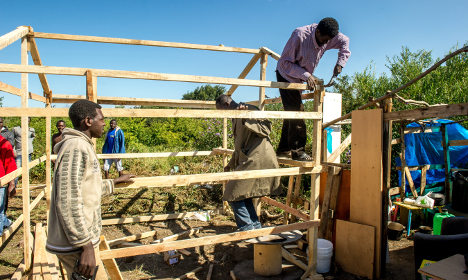 Migrants building a home in the New Jungle in Calais. Photo: AFP

Hammer in one hand, screws in the other, 32-year-old Abdulaziz  from Sudan is building a house in the heart of the “New Jungle” migrant camp next to the Calais ring road.

“This one is going to be strong,” he declares.

“Now I will be better protected thanks to these wood planks,” adds Abdulaziz, who says he fled “massacres in Darfur” and has been in Calais for two months.

He shares his nine-metre-squared lodgings with eight others but has no desire to leave unlike the hundreds who try nightly to smuggle themselves across the Channel to Britain.

“I want to stay in France where I will get better protection,” he says. (Migrants move a mattress in the New Jungle. Photo: AFP)

The “New Jungle” in Calais, with its shops, clinic, school and even church, running water and electricity, appears to be growing all the time.

In the “shopping centre”, a group of Afghans say business is too good to leave.

“We began selling a few bottles of Coke and we became bigger,” says Arian, a 30-year-old Afghan from Jalalabad.

“Cigarettes, that's what works,” grins an older bearded man in a turban at the entrance to the camp, who has erected a huge sign screaming “Special Offer.” Deeper into the camp, a building that is a bit more solid than the others houses the “New Jungle” school.

A few broken chairs, a couple of old beaten-up tables: this is the classroom for around 20 adults, who come to school here every day except Sunday.

“There are 18 teachers from all over the region who provide courses for free,” said one resident of the camp.

Ten or so enter for their daily French class, notepads in hand.

The camp clinic is always busy, patching up migrants that have hurt themselves in the nightly cat-and-mouse with police or sustained other injuries.

Hamada, a 26-year-old Syrian, tells AFP: “I hurt myself by nailing a plank. It's lucky they are there for us.” With the camp stretched out over 20 hectares, residents need a good system of transport.

Adam, a 38-year-old Sudanese man, sits astride a beaten up old road bike that helps him get around.

The bike comes from the “caravan guy,” he explains.

This “guy” is Tim, an Englishman who lives with the migrants in the camp.

Every morning he puts his skills to use in fixing bicycles in the hope that “one day, everyone will have a bike and will move freely … without borders.”

But one of the sources of greatest pride in the camp is to be found in the Ethiopian/Eritrean section: an imposing 15-metre-high orthodox church that towers over the eastern part of the New Jungle.

Finished only two weeks ago, it has the requisite candles and religious icons but, this being the New Jungle, it is still somewhat ramshackle. Instead of a smart carpet at the entrance, worshippers are welcomed with a Winnie-the-Pooh rug.

This doesn't stop them turning up in droves.

“The Mass is on Saturday afternoon. We get up to 200 worshippers,” said John, 17, from Eritrea.

To distinguish their place of worship from the four mosques already in the New Jungle, they are planning to create a garden around the church.