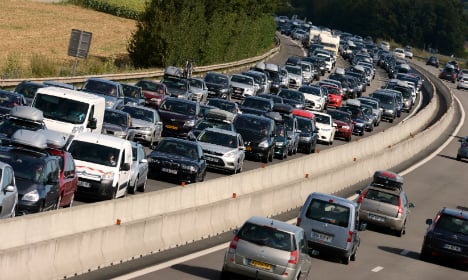 With traffic jams building up by the minute as of Friday afternoon, Saturday has been labelled category “black” in terms of the amount of traffic expected on French roads.

Bison Futé, the government-run site that monitors traffic levels, has advised motorists to delay their journeys to Sunday if possible, saying that the absolute peak is expected anywhere between Friday evening and 6pm Saturday.

“Category black means that on all main roads and highways there will be at least 700 kilometres of tailbacks. That’s easily going to be the case tomorrow,” Cyrille Leblic, a spokesman for the national information road centre (CNIR), told The Local.

He estimated that the tailbacks would in many places exceed 900 kilometres, and, in some cases start as early as 4am Saturday.

“Pretty much any route starting from the north and heading toward the south will be particularly intense,” he said, pointing to the Rhône Valley in the Massive Central area and the A10 highway.
The A13 in Normandy is also predicted to be packed with holidaymakers.

Leblic said that although “Black Saturday” means more wheels on the roads, there are surprisingly few accidents.

“It’s much thanks to the traffic jams, because people have no choice but to drive slower,” he said.