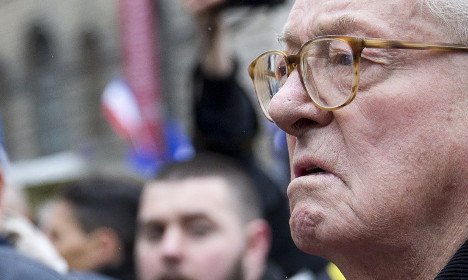 Jean-Marie Le Pen. Photo: AFP
The release of the results of the postal ballot, held earlier this month, marked the latest salvo in a bitter and public feud between the 87-year-old FN founder and his daughter Marine, who now runs the party and is seeking to oust her firebrand father.
The ballot has no legal validity, however, after a court on Tuesday agreed with Le Pen senior that it violated the party's internal rules.
Still, the FN leadership in a statement urged the veteran politician to take heed of the vote outcome and “bow to the popular will” of the party members.
Of the FN's roughly 51,500 members, around 55 percent took part in the ballot on whether to change the FN's statutes and scrap Jean-Marie Le Pen's post as honorary president.
Le Pen himself had urged members to abstain from voting and scored a legal victory by getting a court to block the vote, a ruling that was upheld on appeal.
In a blog post, he condemned the publication of the results despite the court ruling, calling it a political manoeuvre that was “outside the law.”
Marine Le Pen ejected her father from the party in May after he repeated his view that the Nazi gas chambers were a “detail” of history.
But the elder Le Pen's suspension was later cancelled by a court, which found it “violated statutory rules” by not specifying it was a temporary measure pending a disciplinary procedure.
The FN is appealing that ruling.
On Tuesday, the party expressed its “surprise” at “a series of court decisions that aim to preserve a title that Jean-Marie Le Pen obviously no longer deserves, given his increasingly unspeakable behaviour.”
While the FN is still anti-EU and anti-immigration, it has worked hard to soften its image since Marine took over from her father in 2011 and has seen its popularity soar, enjoying a series of election successes.
Several polls have shown she could pose a serious challenge to the conservative Republicans of ex-president Nicolas Sarkozy as well as the ruling Socialists in 2017.