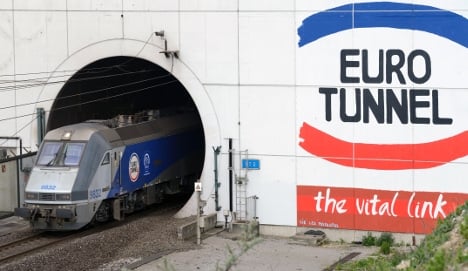 Ten migrants have died at the Calais post in the past two months. Photo: AFP
The man tried on Sunday to leap onto a Eurotunnel shuttle heading through the Channel Tunnel to England but smashed his head on the platform.
He died on Tuesday from his injuries, said a local prosecutor.
Every night, hundreds of migrants make desperate attempts to enter the Eurotunnel premises in order to get to Britain, seen as an Eldorado.
In the early hours of Thursday, several hundred attempts were made — which was nonetheless a sharp decline compared to the previous two nights. (Photo: AFP)
French authorities have bolstered security around the Eurotunnel terminal in the northern port city of Calais, sending some 120 extra police officers as a temporary measure.

“People die every day, on the sea or in the desert, this is no different,” 19-year-old Mohamed from Sudan told news agency TT’s reporter at the migrant camp in Calais.

Mohamed, whose journey to France included spending 15 days adrift on an overloaded boat in the Mediterranean, said that the increasing number of deaths and injuries related to getting through the tunnel wouldn’t scare neither him nor his friends from continuing trying.

“Some have been here for one or two years now. They will never get tired of trying.”

Another migrant was left fighting for his life in Paris, after he was electrocuted trying to jump onto the roof of a London-bound Eurostar at the Gare du Nord station on Wednesday.