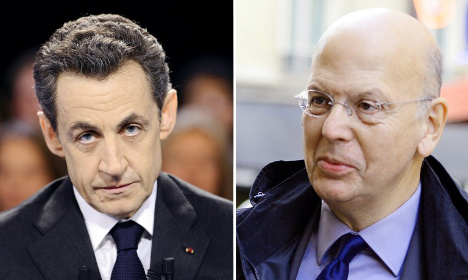 French former President Nicolas Sarkozy and Patrick Buisson. Photo: AFP
Patrick Buisson also faces charges of misuse of public money and embezzlement during Sarkozy's 2007-2012 term, according to a judicial source, relating to opinion polls ordered by the presidency during the period.
Judges suspect that contracts were awarded without the required tender process and that some of the polling was for party political ends.
A second man who remains an advisor to Sarkozy, Pierre Giacometti, was in police detention on Wednesday as part of the same inquiry, but has not been formally charged.
French investigators questioned six officials who served under Sarkozy over alleged fraud in June, but all were released without charge.
Buisson's Publifact and Giacometti's Giacometti-Peron were among nine polling firms regularly contracted to undertake surveys for the Elysee Palace.
France's national audit office censured Publifact in 2009 for a €1.5-million ($1.65 million) agreement that it said failed to comply with regular tender procedures.
A probe into the alleged irregularities was ordered by anti-graft organisation Anticor in 2012, once Sarkozy had lost an election to socialist President Francois Hollande.
A former historian and journalist, Buisson is a self-styled royalist with links to the far right whose relationship with Sarkozy has badly soured since he left office.
In March 2014, Buisson was ordered to pay €20,000 ($28,000) in damages to the former leader and his wife after extracts of tapes he secretly recorded were published on news site Atlantico.
The revelation of what Buisson was doing whilst working as a close confidant of the centre-right president sent shockwaves through the French political class.
The case is one of several fraud probes that have ensnared the 60-year-old former president who made a dramatic return to frontline politics last year and quickly won back control of the opposition.
Despite his legal woes, Sarkozy is expected to make another run at the presidency in 2017 elections.
Url copied to clipboard!