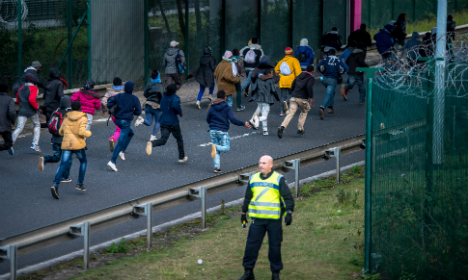 The British press is blaming France for the situation in Calais. Photo: Philippe Huguen/ AFP

Many called for the British army to be sent to France to stop migrants trying to cross the Channel.

Some suggested Nepalese Gurkha troops based in Kent, the southern English county directly over from Calais, were best placed to step in.

“Send In The Army,” the right-wing Daily Mail splashed on its front page.

Over five pages of coverage, its articles included one opinion piece headlined: “We kept out Hitler. Why can't our feeble leaders stop a few thousand exhausted migrants?”

Another was headlined: “Why the French ARE to blame”. It cited Prime Minister David Cameron saying that Britain needed to work with France rather than point the finger of blame.

But the article added: “Sorry, prime minister, but we should point fingers — directly at the French. The responsibility for this increasingly dangerous situation lies with them.”

Britain's top-selling tabloid, The Sun, sent people to send out free pizzas to drivers stuck in traffic jams in Kent. Here, police have implemented Operation Stack to tackle the delays which involves making thousands of British trucks queue on the M20 motorway when services are disrupted. Its editorial also called for British and French troops to be sent in.

“France's heart is not in it. Their cops are overwhelmed and, besides, they'd rather pass the buck to us,” it added. “The anarchy at Calais is a weeping sore on the face of Europe.”

Other newspapers took a broader view.

The Independent's editorial said the only sustainable way to deal with the migrant crisis was by “rebuilding shattered societies and economies wrecked by conflict”.

Columnist David Aaronovitch in The Times wrote that Britain could accept “every single person” of the roughly 3,000 camping out in Calais “and hardly notice it”.

Emma Barnett in The Daily Telegraph bemoaned what she said was a lack of perspective.

“Amid all the discussion of 'secure fencing' and 'delayed journeys', our human compassion has deserted us,” she wrote. “It's time to see the bigger picture and stop the lamentable narrowing of our horizons”.