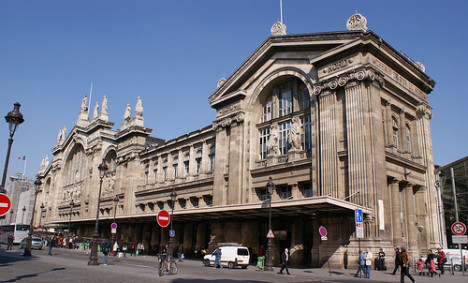 The man was electrocuted at the Gare du Nord station in Paris. Photo: Hugh Llewelyn/Flickr)

The man, who is understood to be an Egyptian in his late teens, was trying to jump from the roof of one train onto a Eurostar train at around 2pm.

He was electrocuted and fell to the tracks below. Medics took him to hospital, where he was left fighting for his life.

A spokesperson at Eurostar confirmed that someone “was on the tracks” early on Wednesday afternoon.

“I can confirm that someone was on the tracks and we turned our power off,” he told The Local.
“There was a slight knock-on effect on our service, and passengers were affected by some short delays.” (Trains were delayed on the Eurostar line at Gare du Nord. Photo: AFP)
The incident occurred at Gare du Nord in northern Paris, at the station's international terminal. A legal source told the AFP news agency that the train was bound for London.
The news comes on the same day that another migrant died after 1,500 migrants stormed the Channel Tunnel in Calais, northern France, late on Tuesday night. The victim's death marked the ninth of its kind in the area since June.
Thousands of migrants pass through France on the way to the UK, hoping for a better life in what many consider to be an El Dorado.
Eurotunnel said on Wednesday that it had already thwarted 37,000 attempts to cross into the UK via the Channel Tunnel this year alone.
Url copied to clipboard!