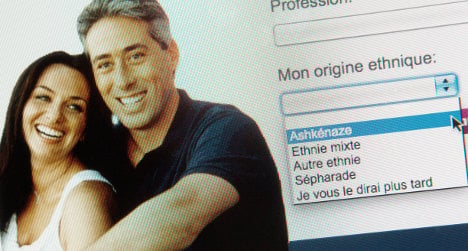 Users of online dating sites hand over data on everything from political beliefs to sexual preferences. File photo: AFP

It may come as a surprise to those who view France as a land of easy romance, but the Gallic dating game is as ruthless as that seen anywhere else.

Indeed, France has also taken part in the global boom in the number of people looking online for love — or a little fun.

But France's data protection watchdog, the CNIL, has now spoken out against the lax data protection practices of sites including Easyflirt and Adopte un mec (Adopt a guy).

In total, 13 sites run by eight companies have been put on notice for not protecting “sensitive” data supplied by their clients.

“Most of these sites offer their users very targeted searches based on their social community, their religious or ethnic (identity), where they live, how they look, their sexual practices and their political opinions” a CNIL spokesperson told news agency AFP.

According to the CNIL, however, some sites aren't giving clients sufficient warning of the fact they are handing over the sort of data they are unlikely to share with a neighbour or colleague.

The watchdog is now calling on the guilty sites to remedy the situation, and among the suggested solutions is the addition of a check box that users would have to tick when providing sensitive personal information.

The CNIL also wants sites to get better at deleting the data of former users, or users who have been inactive for a long period.

But Alexandre Lubot, the boss of the Metic group, one of the networks targeted by the internet watchdog, was distinctly unimpressed.

“The security of our data has always been one of our principal concerns,” Lubot said, adding the CNIL recommendations wouldn't make any difference.

CNIL made headlines recently when if lifted the lid on a scandal involving the nationwide appliance store Boulanger where staff were revealed to be secretly insulting clients when storing their personal details.

An investigation by CNIL into a Boulanger store in the south east of France revealed that when staff stored clients information on computers for future use, they weren't always the kindest and indeed were often racist.
Indeed CNIL remarked that files on customers contained what it referred to “excessive” comments about the clients and went on to publish a few examples.

The 5,828 insulting comments found by CNIL read like a dictionary of French insults.