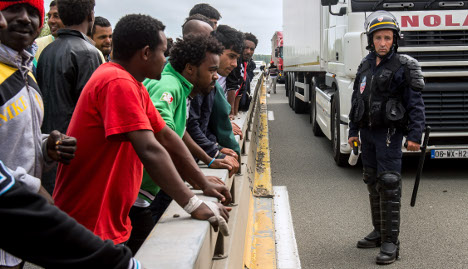 Police and migrants in a standoff near the Eurotunnel terminal in Calais. Photo: AFP
One man died Wednesday as overwhelmed authorities fought off at least 1,500 desperate attempts by migrants to enter England through the Channel Tunnel. Eurotunnel said that it has stopped some 37,000 attempts this year already.
French Interior Minister Bernard Cazeneuve announced on Wednesday that he would send an additional 120 police officers to Calais to try to deal with the crisis, but stressed that the responsibility must also lie with Eurotunnel.
“The state has multiplied the number of security forces managing the Calais situation by five since 2012,” said Cazeneuve, insisting that he was “not looking to start an argument” with Eurotunnel.
The news will unlikely be enough for Eurotunnel, whose spokesman John Keefe told The Local recently that French authorities should do more, saying Eurotunnel was “a transport service not a police force”.

Around two-thirds of this total comes from fencing and other security measures, and the rest from loss of income caused by closure of the line. On Wednesday afternoon, British ministers convened for emergency talks on the mounting crisis, as Prime Minister David Cameron acknowledged the situation in the northern French city of Calais was “very concerning.”
The victim from Tuesday night's storming of the Tunnel, who is thought to be in his late 20s and of Sudanese origin, was apparently crushed by a truck as he tried, with hundreds of others, to smuggle himself into Britain, seen as an “Eldorado” for migrants.
Attempts to penetrate the 650-hectare Eurotunnel site have spiked in recent days, with migrants trying several times a night to outfox hopelessly outnumbered security officials and police.
A Sudanese man in his 30s who gave his name as Abraham said: “I tried three times tonight but it was very difficult with all the patrols. I know it's dangerous but I'm trying.”
Long queues formed outside a medical tent to treat those hurt overnight and doctors said they were also coming under huge pressure.
“Our team can only treat 90 patients a day. Yesterday, we had to administer urgent treatment to 64 people,” said Chloe Lorieux, from the medical charity Medecins du Monde.
Meanwhile, she deployed a team to find the family of the victim, whose death marked the ninth of its kind since June.
“It's always a sad moment but psychological support is critical,” she said. 'Systematic' invasions
The overnight attempts at storming the terminal came after some 2,000 bids to enter the site were recorded the night before, in what was described as the “biggest incursion effort in the past month and a half”.
Eurotunnel's Chief Executive Jacques Gounon told French radio that the firm was up against “systematic, massive, maybe even organised invasions.”
He said it was more of a bid to gain media attention “because, in the end, no one manages to cross the Channel Tunnel.”
Britain's interior minister Theresa May, however, acknowledged that some migrants had indeed made it to British soil, as a source told AFP that “more than 100” succeeded on Tuesday alone.
“It was over 100 on a number of trains. It's an unusually high number, normally it's a handful or zero,” the British source close to the matter told AFP. 'Don't queue up with trucks'
The incident overnight sparked renewed travel chaos at a peak European holiday period, with long queues of lorries forming very early Wednesday morning, according to an AFP reporter on the scene.
Eurotunnel warned on Twitter it was operating with a “disrupted timetable” due to “migrant activity overnight.”
“Travelling from France, access to our passenger terminal is congested by lorries. Don't queue up with trucks,” the firm warned.
Speaking in Singapore, Cameron announced that home secretary May would chair a meeting of the government's Cobra emergency committee to discuss the issue.
“This is very concerning,” he told reporters. “We are working very closely” with French authorities to address the situation.
“I have every sympathy with holidaymakers” trying to get to the continent from Britain or people heading the other way, said Cameron.
May announced Tuesday that London would pay out an additional seven million pounds (€9.8 million) to help France secure the Eurotunnel site on its side of the Channel.
Britain has already spent €4.7 million ($5.2 million) on erecting barriers aimed at securing access to the terminal and the platforms, which should be ready for use in August, Eurotunnel says.
But the crisis shows no sign of easing.
According to the last official count in early July, around 3,000 migrants, mainly from Ethiopia, Eritrea, Sudan and Afghanistan, were camped out in Calais, waiting for the right moment to try to make a dash for Britain, seen as a haven.
One Syrian man, who gave his name as Abdulaziz, queued up for cream at the medical tent, his eyes red with tiredness and his face pockmarked.
He told AFP he had arrived in Calais 17 days ago, leaving behind his family and his IT business in war-torn Syria in search of a brighter future.
“I think Britain means freedom,” he said.