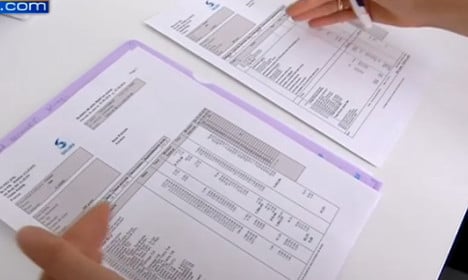 In its ongoing drive to make life simpler for business, the latest element of paperwork the French government is turning its attention to is the payslip.

The “bulletin de paie” as French payslips are called has proved to be an enigma for most workers in France, both French and foreign alike.

The reason given to explain its complexity is the sheer number of laws and agreements in France that shape the relationship between employers and employees.

“For institutional and cultural reasons the French payslip “beats all records for complexity”, read a report handed to the government this week.

The French pay slip can stretch to forty lines of text and lists numerous specific deductions and figures that just looks like gobbledygook at first glance.

There’s “coefficient” and “Siret” numbers, mentions of “convention collectifs”, figures for “cumul brut” and “cumul imposable” and figures all over the place. While it might be a good idea to see exactly where your hard-earned money is going, you're not quite sure in which pot it is going, and you get the impression you’ll have nothing left by the time you reach the “Net a Payer” section in the bottom right corner.

A recent study by a multinational firm found that that the average payslip in France was 40 lines long, in Germany it was 15 lines long, 14 in the US and 11 in China.

As a result the report concluded that all the extra information on a French payslip hides the essential details.

But while the payslip might be a “casse-tête” for the employee, spare a thought for the payroll departments, who have to produce them each month.

The man behind the government report on payslips insists the changes will have no impact on how people are paid, but will “clarify” the end of month statements.

Recommendations include grouping together some of the various social charges under the titles of “health”,” “pensions”, and “unemployment” so workers can understand better what their contributions are being spent on.

It also proposes to include a figure for how much the state has contributed per worker, each month.

The government also wants to push for all payslips to be electronic rather than a paper form which cost double the amount to a business.

Currently only 15 percent of payslips in France are electronic, compared to 95 percent in Germany and 73 percent in the UK.

But like most things in France the pace of change will be slow.

In 2016 a number of companies will voluntarily roll out the new payslips, then in 2017 all companies with more than 300 employees will bring them in, before they become compulsory for all firms in 2018.

No figure has been given for how much it will cost the state to implement the new system.