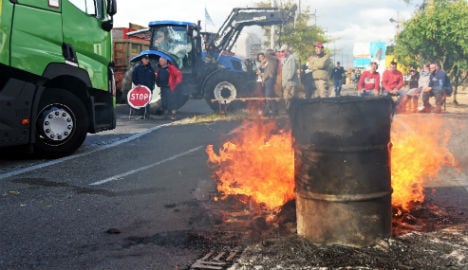 Farmers set up checkpoints on six roads between Germany and France late on Sunday night and said they would continue their action until later Monday.

“We've already held back between 200 and 300 lorries transporting products that are distorting competition for us,” said Franck Sander, local head of the FNSEA farming union.

“For example, we made a lorry carrying Babybel (cheese) turn back. Consumers think this is French but the cheese comes from Slovakia,” he said.

Sander said there were around 1,000 farmers taking part in the protest and had also turned back several lorries laden with fruit and vegetables on their way from Germany.

Farmers' representatives will be holding talks with officials at 2:00 pm (1200 GMT), after which they will decide whether to extend their blockade. Other farmers have carried out similar actions stopping produce getting into France from Spain.

Around 100 farmers ransacked dozens of trucks from Spain on a highway in the southwestern Haute-Garonne region, threatening to unload any meat or fruit bound for the French market.

They used some 10 tractors to block the motorway not far from the Spanish border, causing traffic jams that stretched up to four kilometres (2.5 miles), Guillaume Darrouy, secretary general of the Young Farmers of Haute-Garonne, told AFP.

The action comes after a week that has seen farmers block cities, roads and tourist sites across France in protest at falling food prices, which they blame on foreign competition, as well as supermarkets and distributors.

Farmers have dumped manure in cities, blocked access roads and motorways and hindered tourists from reaching Mont St-Michel in northern France, one of the country's most visited sites.

Fearful of France's powerful agricultural lobby, the government on Wednesday unveiled an emergency package worth €600 million in tax relief and loan guarantees, but the aid has done little to stop the unrest. “The measures announced by the government … none of them deal with the distortion of competition” with farmers from other countries, said Sander, saying French farmers face higher labour costs and quality standards.

A combination of factors, including changing dietary habits, slowing Chinese demand and a Russian embargo on Western products over Ukraine, has pushed down prices for staples like beef, pork and milk.

Paris has estimated that around 10 percent of farms in France – approximately 22,000 operations — are on the brink of bankruptcy with a combined debt of 1.0 billion euros.

Speaking early Monday morning, President Francois Hollande threw his weight behind the farmers, saying: “they should know that, protests or no protests, we are by their side.”