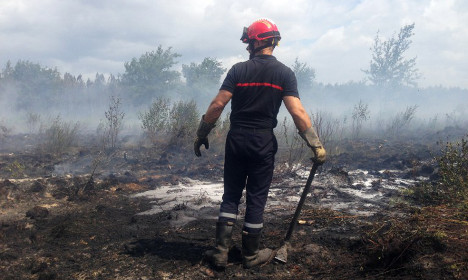 A firefighter surveys the damage as the fire continues to ravage south western France. Photo: AFP
The fire, which erupted on Friday afternoon and spread quickly because of strong winds, has now consumed nearly 550 hectares (1,360 acres) — the equivalent of about 550 rugby fields — of pine forest on the western edges of the city of Bordeaux.
Some 650 firemen and other forces have been deployed, among them reinforcements from across France, as Interior Minister Bernard Cazeneuve visited the firefighters' operations centre on Sunday morning. The homes of 1,000 residents have been evacuated since Friday, reported France TV Info, mostly in Saint-Jean-d'Illac near France's western coast and not far from Bordeaux (see map below).
Residents were still not allowed back home by Monday afternoon, the channel reported. (Photo: GoogleMaps)
Seven firefighting planes backed up ground efforts on Sunday afternoon, and five are scheduled to continue operations on Monday.
France's President Francois Hollande is expected to pay the area a visit on Monday, reported Le Parisien newspaper.
However winds at up to 50km/h were fanning the flames, police official Pierre Dartout said. “The fire has advanced again,” he warned on Sunday.
“It's a complicated fire,” local fire chief Jean-Paul Decellieres said.
“It resurges depending on the direction of the wind,” he added, warning it may take several more days before the fire is put out.
He added that Monday's work would mainly be to contain the spread of the fire, rather than fighting the flames directly. “You have to make sure the fire has nothing to consume,” he told French media. Firefighters are working extensively with preventative measures to stop the fire from raging further and potentially reaching people's homes.
The causes of the fire remain unknown though a police investigation is underway. Much of France is experiencing a drought and several fires broke out Friday in the pine forests that dominate to the west and south of the city Bordeaux.
The region's celebrated vineyards are located mostly to the east and north of the city, with national authorities saying the hot and dry weather has so far favoured the growth of grapes, though the harvest is expected to dip slightly from last year.