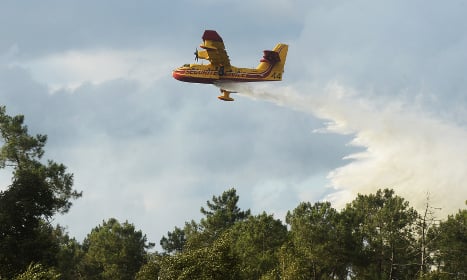 The fire, which broke out Friday afternoon and spread quickly thanks to 50 kilometres-per-hour (30 mph) winds, has now consumed nearly 370 hectares (900 acres) of pine forest and is just 20 kilometres (12 miles) from the city.

But the winds abated overnight and the fire “has calmed and stabilised, but it is neither contained nor under control,” said a spokesman for the regional administration.

“There are still active areas, flying sparks,” he added.

Two water-bombers are working to contain the forest fire, with another two due to join during the day Saturday. Some 250 firefighters and 60 firetrucks were deployed on the ground.

Authorities ordered the evacuation of 40 households in the town of Saint-Jean-d'Illac and 80 in the Bordeaux suburb of Pessac on Friday as a precaution. Some 80 residents of a psychiatric facility were moved to a local gym or to a main Bordeaux hospital.

Much of France is experiencing a drought and several fires broke out Friday in the pine forests that dominate to the west and south of the city Bordeaux.

The region's celebrated vineyards are located mostly to the east and north of the city, with national authorities saying the hot and dry weather has so far favoured the growth of nice grapes, though the harvest is expected to dip slightly from last year.