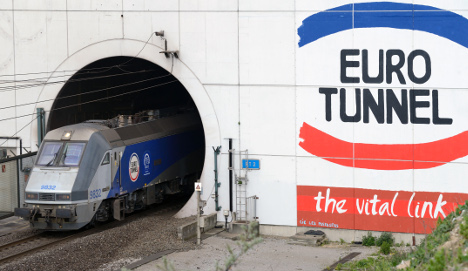 Two migrants died trying to cross into the UK. Photo: AFP
A 23-year-old woman was killed after she was hit by a car on the A16 motorway early on Friday morning. The woman, from Eritrea, was hit while crossing a road at one of the highway exits where many migrants try to board passing trucks.
Late on Thursday night, a man “believed to be in his teens” according to Kent police in the UK, was found dead on top of a train at the Folkestone train terminal in south-east England. The train had come from France.
“Enquiries are ongoing to establish the circumstances behind his death,” the police statement said. A Eurotunnel spokesman said he was a migrant.
Earlier, the company blamed delays to train travel through the tunnel on “intensive migrant activity” at its French terminal.
Several migrants have died in recent weeks in desperate attempts to reach England from Calais in northern France, where thousands of people have converged on a makeshift camp after fleeing war and hardship in countries including Eritrea, Libya and Syria.
Authorities stopped more than 8,000 attempts at crossing the Channel over a six-week period in June and July, according to the British interior ministry.
Some have tried to break into lorries, others are believed to have drowned while attempting to swim across, and more have died trying to board trains travelling through the undersea tunnel that connects the two countries.
Eurotunnel have erected posters warning of the dangers of attempting to smuggle into Britain.
The situation has caused friction between British and French authorities.
“This is a reminder, if one were needed, that any attempt to get through is extremely dangerous,” the Eurotunnel spokeswoman said.
“We reiterate our call to the authorities to address the situation in Calais.”
On Wednesday, Eurotunnel announced it would seek €9.7 million ($10.67 million) in compensation from the British and French governments due to the disruption caused by the migrants.
The company said it had run up a security bill of €13 million trying to prevent migrants crossing from France to England.