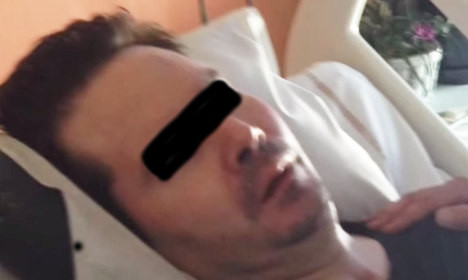 Vincent Lambert is in the middle of a tortuous legal battle over the right to die. Photo: AFP

The parents of a quadriplegic Frenchman who are fighting to prevent him from being taken off life support have asked for him to be protected after threats were made to kidnap him from his hospital bed.

The family of Vincent Lambert — who was left a quadriplegic with severe brain damage after a 2008 road accident — are bitterly divided over whether to stop the intravenous feeding keeping him alive.

The tortuous legal battle over the life or death of a severely brain-damaged Frenchman took a surprising turn on Thursday as doctors refrained from taking a decision on his fate, citing security fears.

Doctors instead suspended the decision, the latest step in a marathon legal battle that has gone all the way to the European rights court and ignited a heated debate over euthanasia in France.

In a statement the hospital said “the conditions of calm and security necessary to continue this procedure are not in place, neither for Vincent Lambert nor his medical team”.

Following that decision Lambert's father Pierre said doctors at the her son's hospital had told them of a plan to kidnap his son if he was taken off artificial feeding.

The father declined to go into detail but the threats appear to have been made in a blog circulating online by pro-life activists who called for Lambert or members of his medical team to be kidnapped.

Doctors asked French prosecutors “to place Vincent under general protection and designate a guardian who could legally represent him,” said Lambert's nephew Francois.

“During the meeting, the … doctors indicated that the decision to stop treatment could not be taken medically due to the threats and pressures they are under that prevent them from working peacefully,” he said.

Francois, who is among those in favour of allowing Lambert to die, said the lack of a decision showed “that intimidation works, that threats work.”

The case has pitted Lambert's wife Rachel and six of his siblings — who insist the 38-year-old former psychiatric nurse would never have wanted to be kept alive artificially — against his devout Catholic parents in a bitter legal tug-of-war.

Rachel said she was “shocked” by the decision.

“I am totally confused. The European court and the State Council gave their rulings and I was hoping for an end to this judicial process,” said his sobbing wife.

Vincent's patient's mother Viviane — who believes her son would improve with better care — said she was “relieved.”

“It means they recognize that he is alive because they want to protect him,” she said.

The hospital said however that an evaluation of Lambert showed his condition was unchanged since he was examined by court-appointed experts in 2014 who ruled he was in an irreversible vegetative state.

The Strasbourg-based European Court of Human Rights in June ruled Lambert should be allowed to die, in a blow to his parents and two other siblings who had launched a desperate attempt to stop doctors from cutting the intravenous food and water keeping him alive.

Doctors launched a new consultation process after the rights court's decision, this time including his parents.

Lambert's medical team had in January 2014 taken the initial decision to stop keeping him alive in line with a passive euthanasia law in France.

But this decision was taken without consulting his parents, who then won a court application to stop the plan, calling it “akin to torture”.

In an appeal, the French supreme administrative court, known as the State Council, ordered three doctors to draw up a report on Lambert's condition and in June 2014 ruled that withdrawing care from a person with no hope of recovery was lawful.

Lambert's parents then took the case to Europe's rights court which ruled the State Council decision was “the object of a thorough investigation where all points of view were expressed and all aspects weighed long and hard”.

Lambert's case ignited a fierce debate around euthanasia in France where it remains illegal despite recent efforts to ease legislation dealing with the terminally ill — a campaign promise by President Francois Hollande.

In March, lawmakers voted overwhelmingly in favour of a law allowing medics to place terminally ill patients in a deep sleep until they die.