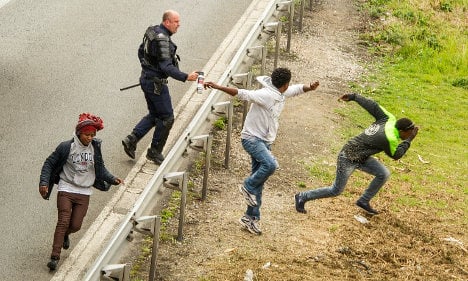 A police officer sprays tear gas to migrants trying to access the Channel Tunnel. Photo: AFP
A young man and a 23-year-old woman were killed in two separate incidents trying to cross the Channel to England in the last 24 hours, the latest in a long line of migrant deaths.
Authorities in Calais met on Friday to determine how to prevent more deaths, as thousands of migrant attempts at crossing the Channel have been registered over the last six weeks.
Regional police chief Fabienne Buccio said that strengthening the 265-strong team of police officers wasn't the solution.
“There is already a considerable police force on the scene and Pas-de-Calais is one of the most heavily policed areas in France,” she told the La Voix du Nord newspaper after the meeting.
Instead, she said that the solution could be found in education, such as erecting more posters warning migrants about the risks, and prevention.
She said that enforced barriers, which were funded by the UK and the Eurotunnel, would be added to each side of the port, and would be completed by the end of July.
She added that the speed limit on the A16 motorway at the exits and entry points to the tunnel would be reduced to 90km/h until the end of September, and that additional lighting would be set up in areas known to be frequented by migrants. (A metal fence erected in the northern French port of Calais. Photo: AFP)
Few would argue that new measures aren't overdue. Authorities stopped more than 8,000 attempts at crossing the Channel over a six-week period in June and July, according to the British interior ministry.
Some have tried to break into lorries, others are believed to have drowned while attempting to swim across, and more have died trying to board trains travelling through the undersea tunnel that connects the two countries.
Eurotunnel have erected posters warning of the dangers of attempting to smuggle into Britain.
The situation has caused friction between British and French authorities.
“This is a reminder, if one were needed, that any attempt to get through is extremely dangerous,” the Eurotunnel spokeswoman said.
“We reiterate our call to the authorities to address the situation in Calais.”
On Wednesday, Eurotunnel announced it would seek €9.7 million ($10.67 million) in compensation from the British and French governments due to the disruption caused by the migrants.
The company said it had run up a security bill of €13 million trying to prevent migrants crossing from France to England.