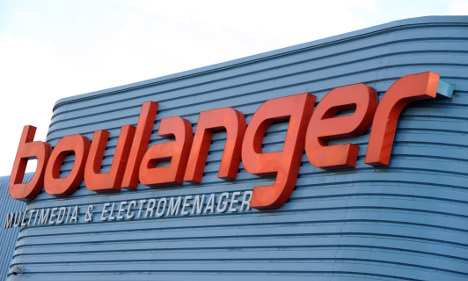 The French appliance store Boulanger has been left red faced after its store workers insulted clients. Photo: AFP
France's data protection watchdog CNIL, which was alerted by a complaint, has reprimanded the nationwide appliance store Boulanger after it emerged staff were secretly insulting clients when storing their personal details.
The store workers may have been polite to their customers' faces but once their backs were turned they let loose.
An investigation by CNIL into a Boulanger store in the south east of France revealed that when staff stored clients information on computers for future use, they weren't always the kindest and indeed were often racist.
Indeed CNIL remarked that files on customers contained what it referred to “excessive” comments about the clients and went on to publish a few examples.
The 5,828 insulting comments found by CNIL read like a dictionary of French insults.
“Connasse” (bitch), “client chiant” (annoying/boring customer), “trés con” (very stupid), “n'a pas cerveau” (brainless), “grosse connasse qui se croit tout permis” (huge bitch who thinks anything goes), “casse couille” (ball breaker), and “folle” (crazy) were just a few examples given by CNIL.
Others suggested racism or personal jibes about people's health.
“Juive (Jew), fort accent africain (strong african accent), problème cardiac (heart problem) and alcoolique (alcoholic) were just a few of the more sinister ones published by the watchdog.
Rather than punish Boulanger, CNIL preferred simply to make an example of the company and has given it three months to remove the abusive comments or face legal action.
For its part, Boulanger said it was “shocked by the revelations its staff had been insulting customers and said an internal investigation would take place to find who was responsible for calling clients “arseholes” and “idiots”.

“They were rare occurences, but did happen and we shouldn't try to not own up to this serious failure,” Boulanger managing director Etienne Hurez said in statement, asking clients to accept his apology for the “unacceptable comments”.

He said the company would conduct its own probe into the thousands of below-the-belt comments and comply with the CNIL's orders.