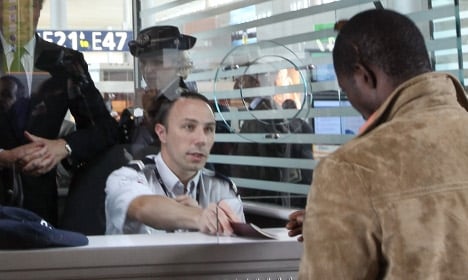 Police have refused to give out candy to children at the CDG airport in Paris. Photo: AFP
Certain French border police at Charles de Gaulle airport are refusing to follow an order to hand out sweets to children.
The whole point of the exercise was to help give a more friendly welcome for people arriving at CDG airport in Paris, as the government tries to eradicate the image that the French are unfriendly to foreigners.
And the plan seemed to be working, with border police at the airport working through a 300kg stack of hard candy at the passport control stations, which they handed out to well behaved children during peak hours.
But on Thursday, officers had had enough, reported the Europe 1 radio.
Frédéric Pillot, spokesman for the UNSA police union, said that giving candy to every child simply took too long and shouldn't be part of a border police officer's daily routine.
“We are not confectioners,” he told the channel. “Distributing candy totally undermines our profession. We have to ensure internal security.”
READ ALSO: 13 ways France aims to become more welcoming

He added that officers already had enough problems doing their job properly, especially considering France's anti-terror alert system known as Plan Vigipirate is at its highest level.
A spokesperson at the airport was quick to say that it wasn't that all police didn't want to give out candy, just a vocal minority in the union.
“It's a few people in the union who say that giving out candy isn't part of a police officer's duty,” she told The Local.
“We are hoping that they can turn it around and be as polite as the rest of us here. The majority of the officers are happy to do it, and there is candy available for children at almost every desk in the airport. We are working to give a better quality of service and to be polite with tourists.”
She said that the candy incentive will carry on as planned throughout the summer, adding that any stereotypes about rude French people at CDG airport could now be forgotten.
“We had a bad reputation ten years ago, but not anymore. Maybe now we are even more polite than other countries – it's just that it's not the same kind of politeness,” she said.
“Politeness isn't something you can compare. We just don't have the same type of welcome in France as in other countries.”
Regardless of how polite airport staff are, the plans to bring in more tourists to France extend much further than just the arrivals hall.
Foreign Minister Laurent Fabius has a grand plan to bring in 100 million foreign tourists annually by 2020 , compared to 83 million in 2012. He claimed last month that the logic was simple: “An unhappy tourist is a tourist that never comes back.”
As part of dozens of initiatives presented in a report to make France more welcoming passport police have also been encouraged to say Hello, Goodbye, and Thank You to visitors.
Other measures to improve tourists' experiences included installing more messages in English, making Metro access easier for those with luggage, and improving taxi access from airports to the city.
Children at the CDG airport, meanwhile, will still get their candy, with officers leaving it as a “serve yourself” option at the control gates.