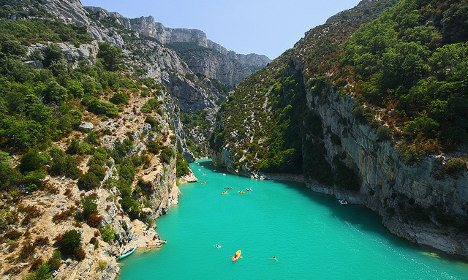 The ever-splendid Gorges du Verdon. Photo: Miguel Virkkunen Carvalho/Flickr
There's no questioning that France is a wonderful holiday destination.
Paris, the capital, is one of the world's most popular spots in the world for tourists, and it's no wonder when you consider the magnificence of the Eiffel Tower, the charm of Montmartre, or the culture in some of the museums.
And outside of Paris there's everything from natural wonders to ancient monasteries just waiting to be visited.
But, a scroll through some of the reviews on travel website TripAdvisor suggest that L'Hexagone isn't to everyone's tastes. We were left baffled (and sometimes entertained) by some of the bad reviews of the most popular spots across the country.
Here are but a few, starting with the old classic:
The Eiffel Tower
Over 50,000 people have reviewed the Iron Lady on Tripadvisor, and it's ranked as the #2 thing to do in Paris (only Musee d'Orsay gets a better score).
But not everyone is pleased. In fact over 300 people ranked it just one measly star. Of course, many of these reviews were about the long waiting times, or the food in the restaurant, but some actually took aim at the structure itself: (The Eiffel Tower. Photo: Jiuguang Wang/Flickr)
“Just a big piece of steel in the middle of Paris,” said one reviewer.
“It's essentially a bigger version of the tower in Blackpool,” another said, comparing the tower to one in northern England, pictured below. They weren't finished: “Basically, if you are ever STUPID enough to even consider going to Paris, sit down and re-evaluate your entire life…”

Chateau de Chenonceau
This castle, perched on top of the River Cher, is 500 years old and generally considered to be one of the pearls of the Loire Valley. It's a heritage listed site and protected by France's Ministry of Culture. But…
“The Chateau is nothing to brag about,” said one tourist. “What a let down.” (A closer look at the castle. Photo: Yvan  Lastes/WikiCommons.)
Mont Saint-Michel
The Abbey on the fortified island of Mont Saint-Michel is a tourist favourite, perched high off the coast of northern France.
But not everyone was impressed.
“I don't know why this is the number one wonder of France. It's an old monastery. That's it!” said one reviewer, offering it just one star. (Photo: Grand Yann/Flickr)
“It is just a 'little too perfect',” wrote another, who also offered just a one-out-of-five-star review.
Some were decidedly harsher.
“A cross between a joyless theme park and the approach to the Nazi gas ovens,” a third said.
Montmartre in Paris
Ah, Montmartre, made famous by the quirky film character Amelie Poulain, known for its winding streets, art, and people-watching cafes. Surely near the top of most people's must-see in Paris list. But not everyone is a fan.
“The most disgusting place I have ever been,” a visitor wrote. This is possibly the most famous stretch of coast on the French Riviera and it attracts the chic, the sharp and – it must be said – the shady, to stroll along the palm-tree lined promenade.

But some people do not fall under its spell.

“It’s just a concrete footpath along a very average beach,” said one unhappy visitor, while another simply said: “It’s nothing but a stupid road overlooking a scruffy city. What’s the point?” The Louvre Museum, Paris
The Louvre museum is the fourth-best rated tourist attraction in Paris, according to TripAdvisor users. It features some of the best-known pieces of art in the world, including the Mona Lisa. (The exterior of the Louvre Museum. Photo: Victor Wong/Flickr)
But hundreds thought it was terrible.
“It looks like a supermarket on a Saturday afternoon,” said one user.
“Frames, frames, frames…” said one disgruntled visitor.
Gorges du Verdon
This awesome canyon in the south east of France is regularly ranked as one of the more amazing natural landmarks that France has on offer. (The picturesque gorge. Photo: Miguel Virkkunen Carvalho/Flickr)
But it appears it's not for everyone.
“Just a small valley in the mountains,” said one. “If you've seen the Grand Canyon, stay away from this place.”
The Palace of Versailles
And lastly, this palace has almost 10,000 mostly positive reviews on TripAdvisor – and it's little wonder.
This royal chateau, south west of Paris, was once home to the likes of Marie Antoinette and remains visually stunning from it's enormous palace and gardens to the sizeable features dotted around inside the gates. (Photo: Hervé/Flickr)
And, again, despite being a popular draw card for tourists, they're not all leaving with a smile on their faces.
“The gardens were just gravel paths bordered by large hedges with a few fountains,” moaned one visitor.
Another was less impressed in general.
“Nothing special,” they wrote, giving the palace just one star.
See some of the daft comments left on TripAdvisor about Spain, Austria, and Italy.