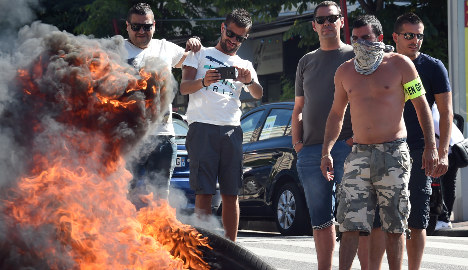 International press, foreign politicians and tourists have all been left stunned and infuriated by the militant action of French strikers in recent weeks.

They've seen taxi drivers blockade airports, tip over and burn Uber cars, ferry workers stop traffic in one of the world's busiest shipping routes as well as start a blaze on the Channel Tunnel train tracks.

They've also seen French farmers paralyze roads in certain parts of the country and block access to the second city of Lyon and the country’s second most visited tourist attraction – Mont-Saint-Michel. Not to forget the tobacconists who vandalized speed cameras and the dumped tonnes of carrots outside the Socialist party headquarters and the country’s upper house of parliament in Paris on Wednesday.

The radical protests, the likes of which are pretty much unheard of in the UK, once again prompted shock and anger among foreign tourists and company chiefs, who were left cursing the “bloody French”.

In the recent ferry workers’ strike, the head of the port of Dover slammed the “mob rule” by “militant Frenchmen” and the head of a UK truckers association even called for the army to be brought in. (Angry French taxi drivers take the law into their own hands in Paris. Photo: AFP)

But for the French themselves and the authorities this so-called “mob rule” is just the way things are done over here. For when the French strike, they don’t hold back and more often than not are only too keen to put on a show.

“The culture of protesting is entrenched in France and when it comes to the authorities as well as public opinion, there is a certain tolerance that you might not find elsewhere,” historian Stéphane Sirot, who specializes in French social movements tells The Local.

“France is the country of revolution and of street protests, led by the popular classes. It’s a tradition here,” said Sirot.

In France, unlike in other countries, unions often decide to flex their muscles first in order to give them greater negotiating power when talks begin. In northern European countries and the likes of Germany, strikes are more likely to take place if long-running talks fail.

The protests, the fires, the road blocks, the clashes with riot police, the emptying of supermarket freezers of foreign meat products, are all part of the democratic process in France, Sirot says.

“This conflict is part of a process of compromise, perhaps the first stage in the negotiations process.

“Often without this initial conflict, no negotiations would take place,” he said.

And the militancy or “conflict” often reaps its rewards. Despite the French government condemning the recent violence during the taxi drivers strike, ministers moved quickly to ease their anger by announcing a ban on UberPop would be immediately enforced.

The farmers road blocks prompted the under pressure government to come up with €600 million aid package quick smart.

French tobacconists scored a victory on Wednesday when lawmakers in the Senate removed a clause that would enforce plain packaging on cigarettes. The vote came shortly after four tonnes of carrots had been dumped outside the French senate.

And on Wednesday the government released details of a solution to protect the livelihoods of those ferry workers, who caused such havoc in Calais last month.

A “French peculiarity”, Sirot explains, is that disgruntled workers in France still expect the centralized state to come to their aid, when things don't go their way.

And the government, unlike shareholders, for example, is highly susceptible to public opinion, especially in an election period, which can partly explain the success of the militant movements.

“The strikers capacity to disrupt daily life is fundamental to their cause and it puts more pressure on the state to intervene,” Sirot says. “Strikers know the political and economic climate in the country and they realize they can pile pressure on the government.”

While the public have a far higher tolerance towards strikers, so too do French police and legal authorities.

You could imagine the crackdown if a group of youths from the poorer banlieues started burning tyres across train tracks, tipping up cars, or blockading towns and tourist attractions. But union members rarely end up in a prison cell, Sirot says.

“It’s rare to see these people punished. There’s a tolerance towards protesters among the public powers. It’s in the national psyche, the powers are more likely to accept it.

“They prefer to forget what they’ve done.”

And while foreigners may be shocked by the combative tactics of the French strikers, the French too are also surprised by the lack of resistance abroad during labour disputes.

Sirot points to the UK where the Conservative government is preparing what’s been dubbed as “the biggest attack on trade unions for 30 years” and it includes plans to criminalize picketing.

“You can’t imagine the government in France trying to do what the Conservatives are doing in the UK. Even if Sarkozy managed to restrict the right to strike for transport workers, it’s still considered fundamental in France.

“There would be a huge reaction here. It would stir a huge public row.”