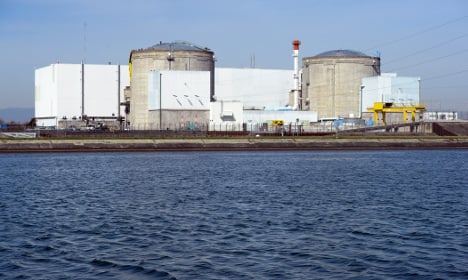 France's oldest power plant at Fessenheim will likely be shut down in 2016. Photo: AFP
Under the new law approved by the National Assembly, nuclear energy will provide only 50 percent of France's electricity by 2025, down from 75 percent currently.
Six months ahead of the global climate conference in Paris, the legislation also calls for a 30-percent drop in the use of fossil fuels by 2030 (compared with 2012 levels), and 40-percent drop in greenhouse gas emissions, compared with 1990.
Renewable energy will increasingly take up the slack — accounting for 32 percent of France's energy mix by 2030, compared with 13.7 percent three years ago.
In a bid to meet the tough new targets, parliament must produce “carbon budgets” every five years, setting emission limits for each sector of the economy.
Polluters will also face major hikes in the “carbon tax”, first introduced last year, which will go up in stages from 22 euros per tonne of CO2 in 2016 to 100 euros in 2030.
Slashing the use of nuclear energy was a key promise of President Francois Hollande in his 2012 election campaign.
“The extravagant use of nuclear energy is over,” said Green MP Denis Baupin. “Now we must organise an orderly transition.”
France is the most nuclear-dependent country in the world, and the second-biggest producer of nuclear energy, with 58 reactors in 19 power stations.
“It's a long-awaited change, since no one, including the opposition, at any time denied the need to break the total dependence on nuclear,” said Socialist MP Francois Brottes, who headed the parliamentary group reviewing the law.
Struggling nuclear industry
But the conservative opposition had nonetheless voiced concern about the impact of reducing the share of nuclear power in the energy mix on France's struggling atomic industry.
Only a month ago, Hollande's office said the government would spend “as much as necessary” to save troubled nuclear group Areva, which posted a record net loss of €4.8 billion ($5.2 billion) last year.
Areva has faced reduced global demand since the 2011 Fukushima disaster in Japan and been hit by cost overruns and construction difficulties in the building of new reactors in Flamanville, northwestern France and in Finland.
By setting a production limit of 63.2 gigawatts on nuclear parks, the government has effectively forced power companies to shut down older reactors as new ones come online.
That is likely to seal the fate of France's oldest power plant at Fessenheim in the northeast, which Hollande had vowed to shut by 2016 and which has drawn protests from Greenpeace and other environmental activists, who say its ageing reactors are dangerous.
The head of electricity utility company EDF, Jean-Bernard Levy, said last week that Fessenheim would probably be shuttered “in the second half of 2017”.
To meet its ambitious goal of halving overall energy consumption by 2050, the government is using a mix of tax breaks and strict new guidelines to ensure builders meet energy efficiency standards, and ordering public companies to use more fuel-efficient cars.
Environment Minister Segolene Royal has said she wants France to become “a nation of environmental excellence” and said the reforms would create 100,000 new jobs in the green sector over the next three years.
Paris will host the UN climate conference at the end of the year, where the organisers hope to conclude an agreement capping global warming at 2C (3.6F) over pre-industrial levels.