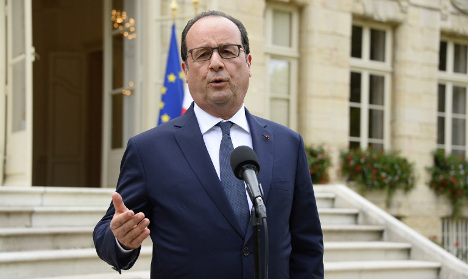 French farmers, left unsatisfied with the government’s €600 million 24-point plan aimed at saving them from bankruptcy, decided to continue their protests on Thursday, which have paralyzed roads and towns in parts of the country.

Unions also warned that “new action” would take place in the “two or three days to come” to protest against the low prices for their produce.

Xavier Beulin, the president of the FNSEA union said on Thursday the anger among farmers must “express itself” but PM Manuel Valls said holiday makers are being punished by the action.

Beulin spoke a day after the government unveiled a package worth more than €600 million, which he dismissed as insufficient.

As a result farmers around the country returned to their barricades at the tourist site of Mont -Saint-Michel and set new ones as the movement spread south.

Although road blocks were dismantled around the Normandy town of Caen, the focal point of protests the movement has now spread across the country and road blocks were in place around Lyon on Thursday morning.

Three main roads into the city from the north, south and east were blocked by hundreds of tractors. (Motorists caught in a jam as farmers block the Oleron bridge. AFP)

There were also said to road blocks in place around the central city of Clermont-Ferrand and farmers warned of action in parts of Burgundy and other regions.

The Pont d'Oleron which links the main land to the island of Oleron remain blocked. On Wednesday numerous tourists were stuck on the island when the barricades went up.

Le Parisien news site published an interactive map of where all the road blocks are. It can be viewed by clicking here. Faced with a growing political crisis, President Francois Hollande added to his schedule an impromptu visit to the eastern city of Dijon to meet officials from top agricultural unions.

Speaking to reporters afterwards, the president described the emergency package as “vital” for an industry in crisis.

He urged local restaurants and cafes to “buy French”, complaining that “in canteens, two-thirds of food still does not come from France.”

Hollande also announced that he and his ministers were in the process of a sales drive around the world — notably in China and north Africa — to encourage other countries to snap up French exports.

“I will be going myself to China at the beginning of November, to support our dairy producers,” he added

Farmers should be valued as business-people who “work hard to make sure that our food is of good quality and that our country can shine due to its excellence,” said Hollande. (Police remove shopping trolleys dumped on the A6 Motorway to the north of Lyon. Photo: AFP)

A combination of changing dietary habits — French consumers are eating less meat — and foreign competition has driven down pork, beef and milk prices.

Retailers and food industry chiefs promised to raise prices on meat and dairy after meeting farmers last month, but the farmers say price hikes in supermarkets have yet to filter down to them.

Agriculture Minister Stephane Le Foll has said around 10 percent of farms in France (approximately 22,000 operations) are on the brink of bankruptcy with a combined debt of €1 billion, according to the FNSEA farming union.

The French government has been at pains to tell the farmers that they understand their plight, with Valls declaring “We hear the anguish of the farmers”.

But on Thursday morning Valls told French radio that: “Anger does not allow for everything; I hope the barricades will be lifted. They cannot penalize those who want to go way on holiday. (Roads in and out of Lyon were blocked on Thursday morning. Photo: AFP)

To ease the crisis in French farming the government announced it would waive around €100 million in taxes and set aside a further €500 million to give farmers more time to pay various debts and taxes.

In addition, France's public investment bank will guarantee 500 million euros in loans for farmers to ease their cash flow crisis.

Valls called on local authorities to go and meet farmers to explain to them the aid package in a bid to stave off further protests.