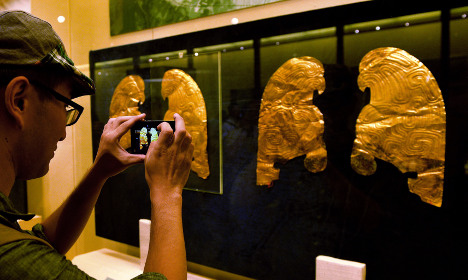 More than 30 ancient gold ornaments went on show in a Chinese museum this week after Paris quietly insisted a billionaire collector and France's top antique dealer return them on the grounds they were stolen.

The move came 15 years after the two men donated the works to a Paris museum following an intervention by France's then President Jacques Chirac, an admirer of Asian art.

Beijing is on a mission to recover the heritage it says was looted by foreigners during a century of humiliation, while many governments are keen to burnish relations with the world's second-largest economy.

Christian Deydier, a dealer and recognised expert in Chinese antiquities, told AFP his government had “dropped its trousers” in its eagerness to return the treasures and curry favour with Beijing.

“It's France's heritage which is suffering,” he told AFP, denouncing what he called an improper legal process and “an export on the sly”.

“The French authorities have dropped their trousers,” he said.

The 32 pieces from Dabaozi in Gansu province date from around the 8th century BC, and have undergone a tortuous journey through the murky trails of the Asian antiquities trade and international diplomacy.

They include 28 golden plaques, but the star works are four large profiles of birds of prey, which would have been part of ceremonial riding tackle or decorated a dignitary's coffin in the Zhou dynasty.

Deydier bought the four profiles in the 1990s from the widow of the Taiwanese antique dealer, from whom he had earlier also purchased the 28 plaques.

Chirac learned of the four ornaments' existence and fell under their spell, but they were too expensive for the French public purse.

So he persuaded his billionaire friend Francois Pinault, the owner of the luxury and clothing group Kering, which owns Gucci, Puma and auction house Christie's, to buy the quartet for one million euros and donate them to the Musee Guimet, France's national collection of Asian arts.

At the same time Deydier gave it his plaques.

Controversy over the pieces' provenance broke out in the mid-2000s, when dealer Bernard Gomez claimed they had been illegally removed from China, but an official investigation reached no conclusion. Paris regularly proclaims the warmth of its relations with Beijing, and French foreign minister Laurent Fabius is a frequent visitor, with Presidents Francois Hollande and Xi Jinping making reciprocal trips in the last two years.

In 2010, Chinese authorities informed France that the pieces could have been pillaged from an archaeological site and a joint Franco-Chinese expert panel was set up last year to investigate, culture minister Fleur Pellerin told the French parliament.

“An array of consistent indicators led to the conclusion that the Chinese request for restitution was justified,” she said in a written answer.

The two men's donations to the Musee Guimet were cancelled, a move which Pellerin said enabled both donors “to gift them to the People's Republic of China and so achieve the restitution”, adding proper procedures were followed.

It is the latest art restitution to China, where the ruling Communist Party uses nationalism as part of its claim to legitimacy and regularly refers to the country's historic suffering at the hands of foreign powers.

Billionaire taxi driver turned financier Liu Yiqian has spent tens of millions of dollars on works originally from the mainland for his museums in Shanghai.

Last year the KODE Art Museums of Bergen in Norway returned seven white marble columns from the Old Summer Palace in Beijing, which was looted in 1860, after another Chinese tycoon donated $1.6 million.

The most hotly pursued items are a collection of 12 bronze animal heads that formed a Chinese zodiac water clock in the palace gardens.

Two were returned in 2013 by Pinault himself — and soon afterwards Christie's was granted a licence to operate independently in China.

Pinault's Kering group did not immediately respond to a request by AFP for comment on his latest donation.

“France is proud of its co-operation with the Chinese government to protect heritage,” the French embassy in Beijing said.