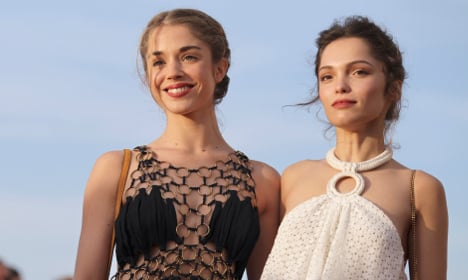 An article titled “The seven lessons in the art of being a French woman” has not gone down too well it seems with the subject of the piece – French women.

“Wow, so much hate and stereotype… I'm a French woman and ressemble nothing you just described… Of course we are not better than anyone else on the planet,” was just one of the many angry Gallic reactions to the article.

French blogger Muriel Demarcus says it's time to end this unhealthy obsession the British (and Americans for that matter) have with French women.

Here she responds to Celia Walden's article, published in the Daily Telegraph, which claimed among other things that French women scare the life out of French men, love pharmacies, and that the only reason they don't get fat is because they drink coffee and smoke, plus they refuse to take advice. (Have French Bond girls Claudine Auger and Carole Bouquet helped add to the obsession about the country's women?)

“When something annoys me, I wait for a while to see if it still bugs me after some time. In this case, it did. What am I talking about? Celia Walden’s article on the seven lessons in the art of being a French woman (published in The Telegraph). I didn’t understand what we French women had done to deserve this.

Seriously, what is it with this obsession with French women? It seems to me that such an obsession shows a close relationship with psychotic processes, and says more about perceived British shortcomings rather than how we French (if there is such a thing as ‘we French’) truly are.

I have been told countless times that I shouldn’t complain because the myths on French women are considered to be positive, but try being taken seriously in a technical job when everybody else holds the belief that you are a glamorous creature who preys on unsuspecting British men at night. A myth, positive or not, remains a falsehood.

I have tried countless times to correct false beliefs, but quickly realised that it didn’t work.

I would get even more personal comments like “all French men have a mistress and your husband probably has one, whether you like it or not” (don’t you love it when people know your life even better than you do?) or “French women are such sluts” (Really? What did I do again?)

Do you believe that we French say ‘oh la la’ at every possible opportunity?

Well, we don’t. But myths don’t work like that.

The beliefs are so deeply ingrained that I am not sure I can do anything about it. But hey, I will keep trying. So here it is: a point by point response to Celia Walden's article:

Don’t you find it a bit rich? Seriously, Celia, who are you to lecture us on sisterhood when you slam French women at the first possible opportunity? And try asking a British mum for the phone number of her kids’ tutor to see if it is any easier…

2. French Women Don’t Get Fat… because they drink a lot of black coffee and smoke

For the record, I don’t smoke, I only have one coffee a day, and I am a runner. Oh, and here is a newsflash for you: there are fat women in France too. Just saying. I don’t think that this is specific to French women. It is a French thing, and it has more to do with the fabulous healthcare system we enjoy in France. When you see your GP in France, you often end up with a prescription longer than the arm. Over in the UK, your GP will tell you to suck it up. You will have to convince him or her that you are sick. In France, it is the opposite. You will have to convince your physician to go easy on the drugs. It’s a cultural thing, and has nothing to do with French women.

So what? Is it a crime? Maybe that’s why we have the reputation of getting more action in the bedroom. Well, I hadn’t noticed. My husband seems fine, and we have lived together for the last two decades. He doesn’t seem traumatised. I have never thrown his Blackberry through the window. And even if you were right, it is a shame that we don’t terrify British men too. It would have saved me the embarrassment of getting unwanted advances and love declarations just because I happen to be French. So, how can I terrify British men too, please?

Life is too short to whinge, right? I passed that stage a long time ago anyway. I am not sure it is a French thing. It’s just me. You should try it.

Celia, if, like me, you had been educated in France, you would have had to take a lot of advice. You would have been corrected and told off every day. Unlike in the UK, in fact, where kids are barely corrected when they make a mistake.

I wonder how people would react if I were to write a similar article on British women. The thing is, I simply wouldn’t, because it would be far too offensive. So much for being French!

The full version of Muriel Demarcus's blog post can be read by clicking here.