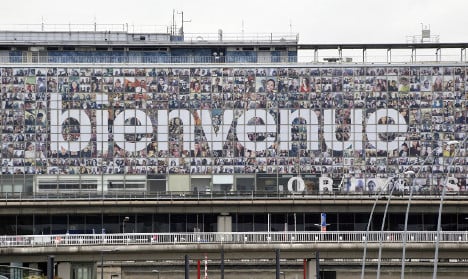 The wall of Orly airport's south terminal reading "Welcome", not far from Paris. Photo: AFP
French expats who return to France often go through the same struggles as the rest of us expats.
For example, how can they show their French payslips to a prospective landlord if they don't have any? How can they ensure their children's foreign education is accounted for properly? And how can they get their foreign driving licenses recognized in France?
Perhaps it's due to this legal red tape that more than half of French people who have lived abroad for more than six years simply don't return.
This statistic was addressed in a report spearheaded by Socialist Party Senator Hélène Conway-Mouret, one of the 12 senators tasked with looking out for the interests of French people living around the world.
She says there is something of a stigma attached to French expats in general, with her report quoting one French expat who said they were ” treated like thieves” upon returning.
“We wanted to address a lot of the clichés about French expats abroad, which are often negative,” Conway-Mouret told The Local.
“There are often suspicions that these people are fleeing the country, when actually they just want to discover the world, work, study, or move for love. We want to break these obsolete clichés and show that France is a modern country that's totally a part of globalization.”
READ ALSO: A closer look – why we're leaving France She added that while it was “a shame” so many of the 1.6 million registered French expats didn't want to come home, these people had a right to be out in the world, just as so many foreigners have chosen to come to France.
Conway-Mouret's team submitted their findings, which were based on responses to thousands of questionnaires, to the prime minister on Tuesday, detailing 49 proposals aimed to make life easier for French expats arriving back home in France.
And some of the proposals, the senator noted, would also help other foreigners coming to France.
“We're not trying to set up some new category strictly for French expats to get them on a fast track to benefits that others won't get. These measures being proposed will have a broader impact, and will help a lot of people. This is a report that's based on what people expect and what they have been waiting for,” she told The Local.
Here are six examples that would have particular benefits for all expats:
1. Accepting foreign finance proof
The report suggested that landlords should accept more than just French payslips to judge tenants' financial resources. The senator noted that this change would be particularly beneficial for students on short-term visits.
2. Less translation
The report proposed a drastic cut down on the translation to French of foreign documents, suggesting that translations are only carried out when “strictly necessary”.
3. Relaxing school sign up rules
Currently, it's a nightmare to sign up a child for school from abroad if you don't have an address in France. The report suggested allowing registration using a work address, or even the address of a parent. If parents can't provide any of these, the report suggested temporarily providing the address of the Mairie.
4. Recognize children's foreign languages
A system should be introduced to more easily recognize children's foreign language abilities, including an introduction of tests that can be taken from a distance.
5. One foreign driver's license system
Aligning all Prefectures on the same regulations for recognizing foreign drivers licenses.
6. Connecting an official phone line
It might sound like a bit of a no-brainer, but not all official bodies in France are accessible by phone from abroad. The report suggested that these phone numbers should be accessible from anywhere. (People queuing to leave France at the Charles De Gaulle airport in Paris. Photo: AFP)
Conway-Mouret, who herself has been an expat for 25 years in Ireland, admits that the current system needs an overhaul.
“There's too much energy wasted on endless meetings and appointments, and needing to produce ten times too many documents at every stage,” she said.
She hoped the report would mark “a big movement towards simplification”, adding that Prime Minister Manuel Valls was pleased with what he saw.
“He is a man of action and said he wanted to see the proposals put in place as soon as possible,” she said, adding that she expected results “as soon as autumn”.
And it appears the changes couldn't come soon enough for France's estimated 2.5 million expats living abroad (of whom 1.6 million are registered).
The report noted that 57 percent of them were concerned about getting back into France's health system if they were to move home, that 54 percent worried about finding a job, and that 54 percent had concerns about finding a home.
Of the French expats who do return home, 59 percent come for work-related reasons while 21 percent return for family.
Many, however, plan to stay away, with 53 percent of French expats who've spent over six years abroad claiming they don't intend to come back.
A recent study found that two thirds of French expats don't plan on returning home within the next five years, citing a more attractive professional life abroad.