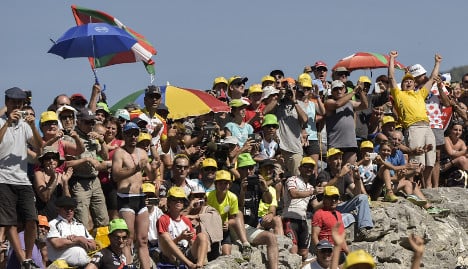 The crowds at the Tour de France are more and more international. Photo: AFP

France is a rare country where interest in the Tour has fallen over the past three years, according to the Repucom sports data company.

Globally, though, there has been a rise, with 23 percent of people saying they follow Tour news, up from 20 percent in 2012.

Repucom said it polled 11,000 people across 11 countries, covering adults and teenagers in the general population.

It found France was the only country to record a drop, from 33 per cent of the population in 2012 to 32 percent now.

Part of the reason could be that the Tour de France hasn't had a home winner since 1984 and no French rider has looked liked being able to end that miserable record in recent years.

In the United States, home of shamed former champion Lance Armstrong, interest has grown four percentage points to 18 percent of the population.

In Britain, where current leader Chris Froome comes from, the rise is one percentage point to 22 percent.

The Netherlands and Spain have the highest interest at 38 percent. The Spanish market is stable from 2012 but in the Netherlands, the rise is three percentage points.

In Italy, home of reigning champion Vincenzo Nibali, the figure has risen eight percentage points to 30 percent of the population.

In new markets such as the United Arab Emirates, interest has rocketed 14 percentage points to 20 percent, the study said.

According to Repucom, the popularity rise can also be seen among commercial backers undeterred by the sport's drug problems. The race, which finishes in Paris on Sunday, now has five top-level sponsors.

“Following the doping scandals that rocked cycling over the last 10 years, we are now seeing that the sport is turning a corner, in terms of fan popularity and in terms of sponsorship,” said Repucom market research vice president Mike Wragg.