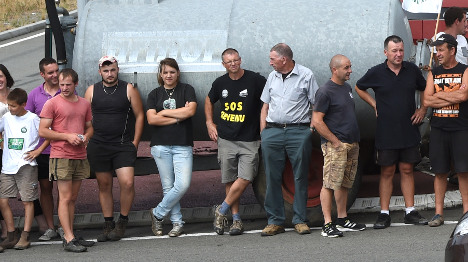 French farmers stand at a road block waiting for the government to hear their pleas. Photo: AFP
The measures sparked a mixed reaction, with some farmers stopping their protests but others vowing to step up their blockades.
Prime Minister Manuel Valls declared: “We hear the anguish of the farmers,” many of whom say they are on the brink of bankruptcy due to falling prices and increased competition.
“We have seen a fear of the future but also the desire to do a job that is more than a job: being a farmer means making a lot of sacrifices … and contributing to the unique job of feeding the French people,” Valls told reporters.
Valls said the government would waive around €100 million in taxes and set aside a further €500 millionto give farmers more time to pay various debts and taxes.
In addition, France's public investment bank will guarantee €500 million in loans for farmers to ease their cashflow crisis.
In recent days, farmers have dumped manure in cities, blocked access roads and motorways and hindered tourists from reaching Mont St-Michel in northern France, one of the country's most visited sites. (Tourists forced to walk to Mont Saint-Michel after roads were blocked by farmers. Photo: AFP)
Overnight Tuesday, farmers briefly blocked the A1 motorway, a key artery between Paris and northern France, with around 500 tractors.
In the flashpoint city of Caen, farmers decided to lift their blockade after the measures were announced, letting through heavy goods vehicles, some of which had been stuck since Monday morning.
However, some militant farmers in the south vowed to block access to Lyon, France's second city.
“The measures will be put in place from this afternoon until tomorrow morning. We do not know how long they will last,” said local union boss
Dominique Despras, who added it would be an “unprecedented” action.
'Exasperation and anger'
A combination of changing dietary habits — French consumers are eating less meat — and foreign competition has driven down pork, beef and milk
prices.
Farmers blame supermarkets, distributors and the food processing industry for keeping prices low.
Retailers and food industry chiefs promised to raise prices on meat and dairy after meeting farmers last month, but the farmers say price hikes in supermarkets have yet to filter down to them.
Agriculture Minister Stephane Le Foll has said around 10 percent of farms in France (approximately 22,000 operations) are on the brink of bankruptcy with a combined debt of €1.0 billion, according to the FNSEA farming union.
While the farmers' actions have grown more violent over the past few days, anger has been mounting since the beginning of the month, with around 12,000 farmers in total protesting across the country.
“There is a sort of exasperation and anger that has been rising for weeks. You can't say you weren't warned,” stressed the head of the powerful FNSEA, Xavier Beulin.
Although agriculture only accounts for two percent of French gross domestic product, farming provides nearly one million jobs directly or indirectly and politicians pay close heed to the industry's mood.

(Farmers block off the A89 motorway. Photo: AFP)
The dairy industry has suffered a triple shock from the Russian embargo on Western products over the Ukraine crisis, a dip in Chinese demand and the end in April of European milk quotas.
According to recent figures from the French agriculture ministry, the price of milk bought from the producer plunged by 12 percent in May compared with the same month the previous year — to €303 per 1,000 litres.
Meat producers have also been hit by the Russian embargo and are battling strong competition from neighbouring countries such as Spain, Germany and the Netherlands.
Valls has also stressed that “the government cannot act alone”. He called on “everyone to live up to their responsibilities”, including retailers and the food processing industry.
Hollande has also insisted that consumers play their role, calling on them to “eat French-produced food as much as possible.”
The president is due to meet officials from the agricultural industry on Thursday in Dijon, eastern France.