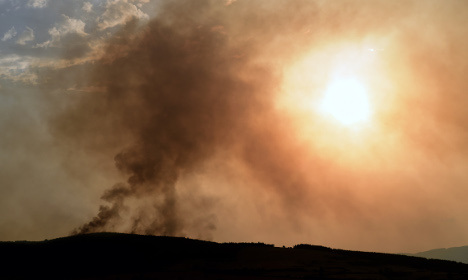 Firefighters fight a forest fire in the Le Pilat national park near Rive de Gier, eastern France. Photo: AFP
As lovely as a bit of sun can be, this year's summer in France has left the country with plenty of problems.
On Wednesday authorities announced water restrictions for 52 of France's 101 départements, most notably in the east and in the south west.
Several areas in south western France were deemed to be in a crisis situation, as authorities warned that the heat and lack of rain meant there was a high risk of wild fires breaking out. (Firefighters in the air helped the 220 on the ground to fight a blaze at the Le Pilat national park. Photo: AFP)
Forest fires have ravaged parts of eastern France in recent days. Some 30 hectares were torched in Hauteville on Tuesday, with firefighters taking to the skies to extinguish a similar sized blaze in Le Pilat national park on Friday.
Despite the significant damage, no one was injured in either of the fires. A crisis water restriction level was issued on Wednesday for several areas, seen in red in the map above, meaning that farmers have to put a stop to any unscheduled withdrawals from levies, and that only priority water use can be undertaken (for health, sanitation, or drinking).
Much of eastern France was under an orange alert, which also affects farmers, and calls on residents to stop watering their gardens and washing their cars.
July's heatwave which has already claimed the lives of 700 people, has also affected tourists and climbers in the French Alps, where authorities have warned that there are risks of avalanches on Mont Blanc as the warm temperatures soften the snow pack.
The mayor of Saint-Gervais-Les-Bains, Jean-Marc Peillex, warned at the weekend that climbers shouldn't even consider trying to reach the summit.
“All climbers need to hear this message – do not go to Mont Blanc right now,” he told France TV Info.
SEE ALSO: Ten reasons to think twice about climbing Mont Blanc Half of all climbers of Europe's tallest mountain go unguided, the mayor noted, and climbers have been advised for the past three weeks to hold off attempts to reach the summit.
The summer avalanches have proved deadly in the past, most shockingly in mid-July 2012 when nine climbers were killed on Mount Maudit on the popular Three Mounts Traverse route.

A slab of ice is understood to have fallen from a cliff face onto a group of climbers, knocking them off the track and causing a 150-metre wide avalanche to sweep up more climbers below.
It was one of the worst disasters recorded on the mountain.
As for the rest of France, Wednesday's early afternoon looks set to be a reasonably warm one for the eastern part of the country, with thunderstorms passing through the south east in the late afternoon (see maps below). Paris can expect a top of 28C.