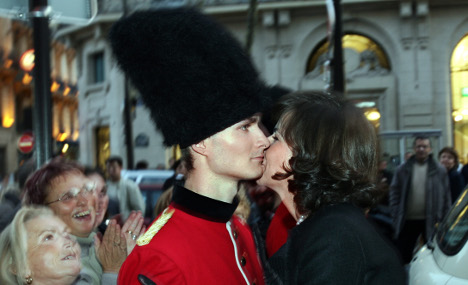 Should expats in France "faire la bise"? Photo: AFP
We've all heard about the famous French greeting kiss – la bise – where two people kiss each other on both cheeks to say hello and goodbye.
And that's fine. In fact, it's a lovely French tradition.
But what happens when two expats meet while in France — should they kiss too?
Oliver Gee says Non!
I already know what the doubters (and McPartland) are going to say: “When in Rome, do as the Romans do”.
But I don't care. There is always a limit.
First, however, I should admit that I quite like the tradition and all its complicated rules, like knowing how many kisses to actually perform depending on location (there's a whole website dedicated to this conundrum), or knowing when exactly another man is “close enough” of a friend to warrant a kiss.
But what I don't like is when expats, especially those who are relatively new to France, try to dance the same dance when greeting other expats.
Why do they do it? It's a French tradition, not an expat tradition. For me, it's as strange as if a French person moved to Australia and started calling everyone “mate” as soon as they arrived. Or moved to New Zealand and started rubbing noses with all the other French people there like the Maoris do.
Every time I get an awkward kiss from another expat I always wonder why we're doing it.
For me, I think these expats who give each other these fake kisses are the same kind of people who pepper their English conversations with French words, almost as if to say “look how integrated I am”.
You know who I mean, the kind of people who say Paree instead of Paris when they're speaking English. Sacré bleu.
Anyway, for me, I think the kissing should be left to the French, or for when us expats meet the French.
Otherwise we're all just pretending. And who wants a pretend kiss? Surely Mr Gee, this all comes down to the simple argument of “When in Rome, do as the Romans do…” Or at least most of the time.

The only reason I can see for an expat avoiding or even refusing or do “la bise” with another expat (and I know many who do) is because they have a fundamental issue with the double kiss greeting.

Don’t get me wrong, it has its flaws. For example, just do it without making a sound with your mouth and you'll see how ridiculous it can seem.

Plus having to go round all the guests at a dinner table or party in France to fake kiss everyone twice, knowing that you’ll probably never speak to them again, just makes the ritual seem a waste of time and energy sometimes.

But apart from that it’s a fairly simple and consistent form of greeting that foreigners should have no resistance to.

When in France or any country for that matter, we adopt certain aspects of the culture, or at least the ones that suit us.

I am yet to push on the Metro with a group of fellow foreigners, or drive a car “up their backside” until they pull over to the other lane, but have shared plenty of aperitifs with them, sat down for hours in a restaurant with them, even left without tipping after a meal with expats.

It’s got to the point where greeting expats in France is now more confusing than greeting the French used to be.

You have to ask yourself all these questions before going in for the double plunge: “Are they are a kisser?” or “are they just a waver?” or “maybe they’re a hand shaker” or “maybe a little smile or a nod would be appropriate.”

Surely if we all accepted a double kiss for expat women and blokes it would make life a lot less complicated.

Basically we all go native to some extent and French kissing is far from the worst Gallic trait for us to adopt, hey Gee?