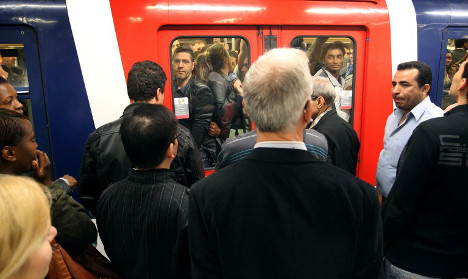 Commuters in Paris wait to board a packed RER train. Photo: AFP
Yes, Paris empties out over the summer, but that doesn't mean life will necessarily be easy for those left behind.
Especially not the commuters.
The public transport operator RATP has been announcing for a long time that one of the biggest summer renovation projects will be on the RER A line between La Défense and Auber – which will be closed down between July 25th and August 23rd (inclusive).
This month-long work will take place on a line that carries 1.2 million commuters each day to the city's biggest business area. Commuters can expect the same renovation delays for the next three summers.

There will be a series of replacement shuttles available and extra trains running on eight Metro lines, but even the RATP has confessed that it won't be enough to handle the sheer number of commuters who travel to La Défense each working day.
News channel BFM TV listed a series of recommendations for those affected, including using office-sharing options like Néo-Nomade or taking up the offer from G7 taxis which will offer a 15 percent discount for anyone affected. It also noted that some French companies are even encouraging employees to work from home.
Elsewhere in Paris, line renovations could prove a real hassle for public transport-dependent tourists who need the trains and Metro to get to some of the City of Light's most famous monuments.
The RER C line will be closed between Avenue-Henri-Martin, Javel and Paris-Austerlitz (see image below) from July 15th to August 22nd.
The Eiffel Tower and the Musée D'Orsay are on this line, but both stations are reachable by Metro, and there will be replacement buses in place too. The ever-busy Cergy-Prefecture station, which includes a high-speed TGV stop, will be completely shut down from July 15th to August 29th.

A number of stations on the city's Metro lines will be closed for renovation too, including: