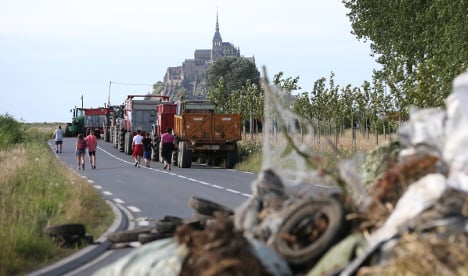 Toursists forced to walk to Mont-Saint-Michel due to French farmers barricade. Photo: AFP

The blockade was put in place on Monday as part of a regional protest by farmers across Normandy that also saw roads in and out of the town of Caen blocked off.

After removing the barricade of farm vehicles overnight, the local prefecture announced around 8.15am that the tractors had once been placed across the road leading to the famous monument off the coast of the western edge of Normandy.

Farmers have threatened to block off access to Mont-Saint-Michel until Thursday.

Their protests come at the start of the holiday season and could severely impact on business at the World Heritage site.

On Monday tourists were seen having to walk past the barricades and along the road to get to the island.

A member of staff at Mont Saint-Michel told The Local on Tuesday that it would be “very complicated” for tourists to visit the famous World Heritage site given the number of blockades around the region.

However the site is open for business. Farmers protests continued to take place across north and west France with the peripherique around Caen still blocked and manure dumped outside supermarkets in the western city of Brest.

Farmers' ire is directed against the big supermarkets who they accused of keeping their prices low, and therefore threatening farmers' livelihoods.

The protest began on Sunday when many farmers were armed with buckets full of earth and manure, some of which they dumped in front of businesses — including an abattoir, a distribution company and a meat-processing plant — which they accuse of being part of the problem.

“Angry farmers” and “You are letting us die” were among the banners on display, as the tractors organised a go-slow on one of the main roads through the Normandy and Calvados regions.

“It's one of the biggest mobilisations for several years,” said Sebastien Debieu, secretary general of farmers' union FDSEA. Retailers and food industry heads promised to raise prices on meat and dairy after a meeting with farmers last month.

On Tuesday President François Hollande tried to calm the growing protests by declaring an “emergency plan” to aid the farmers will be presented to the government on Wednesday.

“The situation for cattle farmers and milk producers is extremely difficult,” said Hollande. “That's why I call on distributors to accept their responsibilities. They must stick to their commitments.”