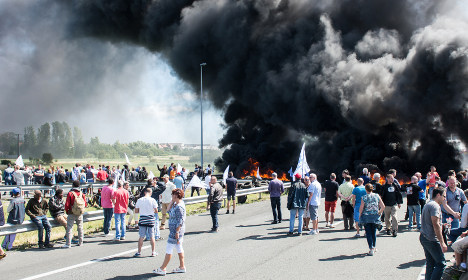 Striking workers from MyFerryLink blocked access to the Channel Tunnel on Tuesday, by burning tyres across the road and restricting access to the terminal.

Social media users reported around 1.30pm that the protestors had been moved on, but that the A16 motorway was still closed.
A Eurotunnel spokesman said that while the affects on traffic have been “nothing significant” so far, motorists may be in for bad news throughout the afternoon.
“Even though they're out on the motorway burning tyres and getting their pictures taken, they've only actually caused small delays,” Eurotunnel spokesman John Keefe told The Local.
“But we can only wait to see what happens after lunch, that's when they often come back with a slightly more robust approach.”
He added that it was mostly freight vehicles that would be affected if the problem was to worsen, and that Tuesday in the middle of the day was generally one of the more quiet times as far as tourist travel was concerned.
He urged any motorists or Eurotunnel passengers with concerns to check the Eurotunnel's official website for up-to-date information. The EuroTunnel's official Twitter account tweeted in the early afternoon that motorists should “expect heavy congestion and long delays on the A16”.

The protest is being carried out by members of the Maritime Nord Union as part of  their long-running battle to save their jobs after Eurotunnel decided to sell two of the MyFerryLink boats, which were formerly Sea France, to Danish company DFDS.

Hundreds of staff members were not re-employed after the sale.