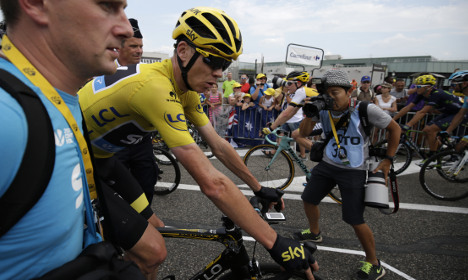 Christ Froome has been given extra security after having had urine thrown in his face. Photo: AFP

The spotlight at this year’s Tour de France is very much focused on the Sky team with accusations flying around that Froome and his team are benefiting from illegal substances.

With Froome and Sky in complete control of the race after a stunning performance in the Pyrennees last week, it appears certain spectators bear a grudge against the British team.

On Saturday Froome said he had a cup of urine hurled at him by a spectator during stage 14 of the race and his team mate Richie Porte claimed he was punched in a previous stage as well as being spat at.

Spectators have taken to jeering the team as the atmosphere towards Froome has turned sour and the Sky team have complained they fear worse could be to come unless security was stepped up.

On Sunday six members of the French police could be seen present around the Sky bus, with officers stationed beside riders as they warmed up in the morning.

Sky warm up surrounded by six gendarmes. pic.twitter.com/GZc9wIu806 via @a_thomas_commin

Froome said the extra police was an organisational call, not one made by his team.

“If you look at any big sporting event such as tennis or football, there are police all over those events, especially when fans start getting more involved in the event than they should do.

“I don't think that it's bizarre to have police around in the morning as we're warming up or leaving buses.”

For the last few days, Froome has fought a running battle with some sections of the media after accusations of doping and using a 'motorised' bicycle were thrown at him.

It is likely the same kind of police protection will accompany the Sky team throughout the rest of the race which ends on Sunday July 26th.

Tour de France chief Christian Prudhomme has called on the public to respect the yellow jersey and has criticized those accusing Froome of doping.