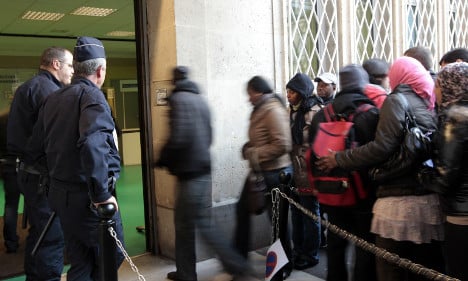 Unidentified migrants get in "the Migration and Integration" office at the prefecture of the French northwestern city of Caen
The raft of measures, introduced on Monday, aims to make a dent in the mountains of paperwork that come with France's immigration system that has dealt with around 200,000 legal immigrants each year for the past decade.
The majority of these immigrants come for family reasons, with 60,000 arriving to study, and 20,000 for humanitarian reasons, such as asylum or illness.
The moves are intended to both allow a kinder welcome to foreigners, but also as as way of attracting global talent to come and live and work in France.
And with around 2.5 million non-EU foreigners living in France (60 percent of whom come from Algeria, Morocco, Turkey, and Tunisia), it's no doubt a priority to help them get through what Interior Minister Bernard Cazeneuve has called “a real administrative obstacle course”.
Cazeneuve questioned: “How can foreigners be expected to integrate when hundreds of thousands are being sent to the Prefecture a dozen times each a year?”
The proposal, which has been dubbed in the French press as the 'Rights for foreigners bill', has drawn criticism from the opposition, which labelled the proposals as nothing but “laxism” on the subject of immigration.
“And they're asking us to look at this in the middle of summer in an attempt to avoid any kind of debate,” Republicain MP Thierry Mariani told Le Figaro newspaper.
Here are some of the key points from the proposed law.
1: Multi-year residence permit
The government hopes to do away with the long queues that come with the immigrants who simply want to renew their residence permits. After immigrants have been in France for one year, they would be able to apply for permits that stretch up to four years into the future, meaning they won't have to head in for renewal every 12 months as they do now.
The new law proposal would mean a huge reduction in paperwork for foreigners and the government alike, many of whom suffer the inevitable tangles of repeat visits to the local Prefecture. As it stands 99 percent of the renewal applications are granted.
2: Talent passport
Another of the main measures proposed is the creation of a kind of a skilled passport, called “un passeport talent” in French, to allow an easier four-year passage for skilled migrants. This would allow people with particular talents – such as artists, scientists, athletes, and business leaders – the possibility to more easily live and work in France.
It would replace the mess of various visas issued depending on one's circumstances and reasons for being here. The idea of these four-year visas is to attract talent to France and to make them want to stay.
3: Access to data
In the interests of fighting fraud, the new proposals suggest that prefects are allowed permission to check with other authorities for information about those applying for residence permits. This would include banks, schools, and social security services, and would let them verify information given to them by any applicants.
READ ALSO: Immigration in France in ten stats that matter