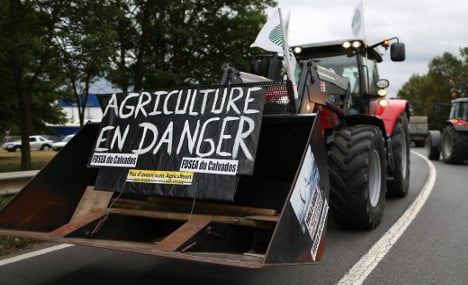 French farmers stage protests over low prices that they say are leaving them on the edge of bankruptcy. Photo: AFP

French farmers used their tractors to block all roads in and out of the Normandy town of Caen on Monday to protest against low prices for their goods and a lack of support from the government.

They also blocked access to Mont Saint-Michel, one of the country's top tourist spots which stands in the sea just off the coast of Normandy and Brittany.

Their ire is directed against the big supermarkets who they accused of keeping their prices low, and therefore threatening farmers' livelihoods.

Many farmers were armed with buckets full of earth and manure, some of which they dumped in front of businesses — including an abattoir, a distribution company and a meat-processing plant — which they accuse of being part of the problem.

“Angry farmers” and “You are letting us die” were among the banners on display, as the tractors organised a go-slow on one of the main roads through the Normandy and Calvados regions.

“It's one of the biggest mobilisations for several years,” said Sebastien Debieu, secretary general of farmers' union FDSEA. Retailers and food industry heads promised to raise prices on meat and dairy after a meeting with farmers last month.

But farmers say they have yet to benefit from the price hikes in supermarkets, triggering a wave of strikes across the country.

Samuel Bidert, of the Young Farmers group taking part in the protest, said he was currently paid €300 ($325) per tonne of milk, but that he needed €370 “to live in dignity without depending on my wife, and 340-350 to pay my costs without receiving a salary”. The farmers say they won’t end their protests unless France’s Ministry of Agriculture Stephane Le Foll visits Normandy to hear their concerns.

The French government says it supports the farmers and is sympathetic to their plight as thousands face bankruptcy.

But calls for the large supermarket chains to raise their prices has had little impact and French farmers are suffering from increased competition for their pigs and cows.

There’s also the fact that between 2003 and 2010 France has seen a 15 percent drop in the consumption of meat.

It seems all the French government can do is encourage the public to eat Made in France meat and help rescue their struggling farmers.

A new label will be added to products from Monday July 20th to help promote Made in France farm produce.

“If we want agriculture to continue to thrive and not just survive, then we have to support it,” said Hollande at the weekend adding that he understood the consumer is likely to opt for the cheapest meat on sale no matter where it came from.

“I call on consumers to support our farmers by favouring the consumption of French products. Everybody needs to play their part.”

Agriculture minister Le Foll said he would meet the farmers in Paris on Thursday after speaking with pricing experts, but the unions are calling for a sit-down with all the food industry bosses.

“Meetings in Paris that don't lead to anything do not interest us,” said Jean-Yves Heurtin, regional head of the FDSEA.