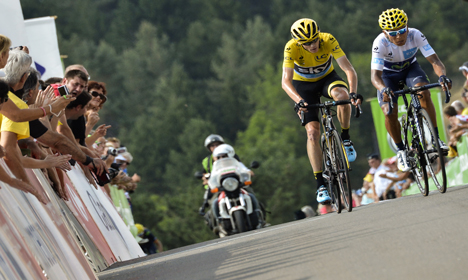 Chris Froome, second from right, got hit with a cup of urine. Photo: AFP

Froome hit out at certain media for “irresponsible reporting” of his and his Sky team's success on the Tour so far, blaming them for setting the “tone” that led to Saturday's attack.

Speaking after the 178.5km 14th stage from Rodez to Mende, Froome pulled no punches.

“A spectator about 50-60km into the race threw a cup of urine over me, shouting 'dope' (doped),” said Froome.

“It's unacceptable on so many levels. We're professionals, we work really hard for what we do and for someone to come and do that, it's not what we're here for.”

He then pointed the finger, although without naming names.

“I certainly don't blame the public for this, it's certainly a minority of people out there ruining it for everybody else,” he said.

“I would blame some of the reporting on the race, it's very irresponsible. Those individuals know who they are.”

Froome, who has not only been accused of doping but also of using a motorised bicycle, added: “It's not riders bringing the sport into disrepute, it's individuals and they know who they are.”

“The behaviour of certain spectators, a minority obviously, is evidently intolerable,” Prudhomme said before the start of the 15th stage from Mende to Valence.

“Insulting the integrity of the yellow jersey is unacceptable.”

He added, however, that a dislike for the Tour leader was not new. “The top racer has never been liked in the history of the Tour de France.

The incident happened after Froome's teammate Richie Porte revealed earlier that he had been punched on Tuesday's Pyrenean stage, when his team leader won.

“I was (punched) in the last 3km. I got a full-on punch,” Porte told the Telegraph Cycling Podcast.

“It was the same atmosphere on Alpe d'Huez two years ago.” He added: “It's a disgrace how some of these people carry on.”

Despite the attack, Froome tightened his grip on the race leader's yellow jersey.

On a steep 3km climb at an average gradient of 10.1 percent that peaked just over 1.5km from the finish, several riders attacked Froome, starting with Nairo Quintana.

But the 2013 champion proved equal to them all and by the finish had even gained time on his rivals.

Up front, Briton Cummings out-thought a pair of Frenchmen to give his debutant MTN-Qhubeka team victory on the international day to honour the life of Mandela.

As Romain Bardet and Thibaut Pinot played cat-and-mouse after cresting the brutal final climb, Cummings showed no mercy and scorched past the pair to take victory.

“I've been trying for a long time to do this, it's always been a dream,” said Cummings, 34.

“We had a special meeting this morning and we had special helmets on because it's Mandela day, it was a big motivation.”

Froome, who was born in Kenya and grew up in South Africa, was delighted for Cummings and Qhubeka, who this year became the first African team to take part in the race.

“Congratulations to MTN, it's a massive victory for a wildcard team and they fully deserve it.”

In the fight for victory, Cummings hid at the back of a 20-man breakaway throughout the day, keeping well hydrated and taking few turns at the front.

“I just time-trialed the last climb, I didn't think about the victory, I just did it as well as I can,” said Cummings

“I guess I just paced my effort better than everyone else.”

Bardet had stormed clear on the climb before being caught by Pinot.

But then the two started looking at each other rather than racing to the finish, giving Cummings his opportunity to come back at them and strike.