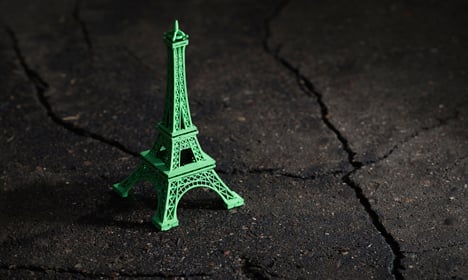 Ministers are gathering to lay the groundwork for the UN climate conference in Paris in Nov-Dec. this year. Photo: AFP

Just four months ahead of a UN conference in the French capital tasked with producing a historic climate pact, US scientists said 2014 was a record year for sea level rise, land temperatures, and the greenhouse gases that drive dangerous global warming.

But overwhelming consensus on the urgency of the problem has not translated into significant progress on united action to prevent the planet from overheating.

Ministers meeting on Monday and Tuesday “have to take ownership of the content of the negotiation, otherwise their negotiators will not really be able to engage on the key political issues,” she said.

The political discussions will be followed in Bonn at the end of August with technical negotiations on the content of a draft agreement, with another ministers' gathering slated for September.

The 32 foreign and environment ministers and 13 senior negotiators in Paris, working under the guidance of France's chief diplomat Laurent Fabius, have their work cut out for them.

A draft agreement emerging from earlier rounds is little more than an exhaustive laundry list of problems and options, and is too unwieldy, Tubiana said.

Scientists say disastrous climate change can be avoided at this threshold, but warn the planet is on target for double that, or more.

The Paris agreement will be supported by a roster of national emissions-curbing pledges. Many parties — including China, the United States and the European Union — have already submitted their plans.

“But there is no guarantee that when you combine the pledges they will collectively be consistent with the 2 C objective,” Tubiana pointed out.

Hence the need for a mechanism to ensure pledges add up, and a review process to monitor adherence, she said. Both issues remain highly contentious.

In the jargon of the climate talks, ambition refers to the level of emissions cuts needed, and differentiation is about sharing out responsibility for action.

Poor nations say the West, which has polluted more for longer, should carry more of the burden for emissions cuts, but the US and other rich countries insist on equal treatment and point the finger to emerging economies like China and India now among the top emitters.

The question of money is another Gordian Knot.

Poor countries insist that rich nations must show how they intend to keep a promise of boosting climate finance to $100 billion (92 billion euros) per year from 2020.