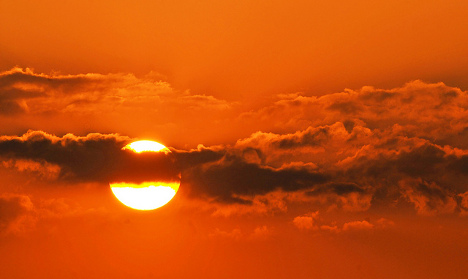 Temperatures shot up 9C in one hour. Photo: Tambako/Flickr

If some of the 60,000 residents of Troyes woke up in a sweat on Thursday night then you can't blame them.

The town, in the Champagne region of northern France, saw temperatures rise from 24C to 33C in between midnight and 1am. That's an increase of 9C (or 16.2F) in just one hour.
The heat burst, a rare atmospheric phenomenon, was reported by La Chaîne Meteo weather service, which noted that the humidity level plummeted at the same time from 55 percent to 22 percent (see graph below). Heat bursts are particularly uncommon, especially for France, and are more likely to be reported in the great plains of the United States, the weather service noted.
They typically occur at night time during periods of decaying thunderstorms, strong winds, and low humidity.
Thursday night in Troyes was no exception, with wind speeds reaching 70km/h after temperatures in the evening had been over 35C. The rest of France has been sweating through a mini heatwave over the past few days, with temperatures in the mid to high thirties across the entire eastern side of the country since Wednesday.
The high temperatures followed a more severe heatwave earlier in the month that left 700 people dead.
Temperatures will remain high in some parts of eastern France on Friday afternoon (see map below), with scattered thunderstorms breaking out in the central east. The French can expect another warm night on Friday, below, as temperatures will hover around 20C throughout the night.