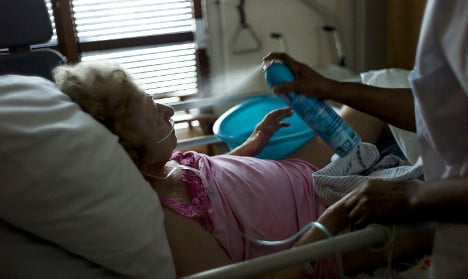 A nurse cools an elderly patient in a hospital near Paris. Photo: AFP
The heatwave that hit France between the 29th of June and the 5th of July left 700 dead, the ministry announced on Thursday.
The figures were taken from the fact that there were seven percent more deaths registered in France during this period than at the same time last year.
Almost 3,600 people were hospitalized during the heatwave, while almost 1,500 people saw their local GP after suffering from the heat, the ministry added.
The heatwave was a record breaker in some parts of the country for the time of the year, and even in the capital temperatures almost hit 40C.
While the death tally is high, it pales in comparison to the heatwave of 2003 that resulted in the deaths of 15,000 mostly elderly people.
The tragedy saw the government launch an emergency response programme in which authorities can raise a three-tiered alarm system to ensure there won't be a repeat.
France is currently in the middle of another mini-heatwave, with temperatures forecast to soar into the mid to high thirties across the entire eastern half of the country on Thursday afternoon (see map below). (Thursday afternoon forecast: Map: Meteo France)
After the temperature is forecast to hang around the low twenties late on Thursday night, the weather will remain warm on Friday and then cool somewhat into the weekend.