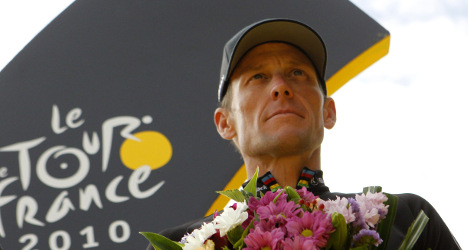 Lance Armstrong can expect a frosty reception when he cycles the Tour de France route on Thursday. Photo: AFP
Armstrong was riding a 198-kilometre (123-mile) stage of the race a day ahead of the competing riders for a leukaemia charity but cycling officials have branded the exercise “disrespectful”.
The 43-year-old American, who himself is a cancer survivor, stressed he was riding for a “great cause” and it was something he was committed to “regardless of what people think”.
The charity, the brainchild of former England football international Geoff Thomas who beat leukaemia, aims to raise “around £1 million” (1.4 million euros, $1.5million) mainly via sponsorship garnered by the 10 other amateur cyclists riding the route.
Armstrong was surrounded by reporters but no members of the public were out on the course to welcome him as he set off.
The trip has sparked further controversy on a Tour de France that has been marred by a doping-related scandal surrounding the tainted Astana team of Tour de France champion Vincenzo Nibali and questions over the performance of race leader Chris Froome.
But Armstrong batted off the accusation that his presence was a distraction.
“It's one thing if I said, 'Oh, I'm going to go to the race and I want to stand around at the start.' I'm not asking that, you know. I understand there is sensitivity around that, but here helping a group of people in a great cause, I'm going to do that forever,” insisted the former champion.

'I'm an old man'
The participation of Armstrong, who admitted in a stunning TV interview in 2013 that he had doped his way through the Tour de France throughout his career, has already sparked controversy.
The president of cycling's governing body, the UCI, has warned that Armstrong “may not get quite the welcome he would like” in France.
“It is undesirable, I think it is disrespectful. I think there are plenty of ways of raising money for charity that Lance could do,” said Brian Cookson. Armstrong dismissed the comments, saying: “Brian Cookson needs to worry about other things,” a clear reference to the latest allegations against Froome.
However, Armstrong declined to be drawn on Froome and the numerous questions about doping levelled at him.
“For the first time in a couple of years I've watched the race,” admitted Armstrong.
“It's been an interesting first week. There's obviously a lot of drama in the race, like crashes and winds and things like this that separate a lot of people. Chris Froome has been smart. He's avoided all the problems.”
Asked if he found Froome “impressive”, he replied: “Well, of course. If you're leading the Tour by three minutes, that's impressive.”
For his part, the Kenyan-born yellow-jersey holder, gave short shrift to questions about Armstrong.
“We definitely don't see it as him being necessarily back at the Tour, he's not on the starting line with us,” said the 30-year-old Briton.
However, he said he supported Thomas's cause which was “close to my heart” — Froome's own mother died of a blood cancer a few years ago and he also supports cancer charities.
Armstrong quipped he would have enjoyed the experience much more without a crowd of journalists hovering around him and batted them off, saying he had to get going.
“I have to ride a long way. It's going to take a long time. I'm an old man.”