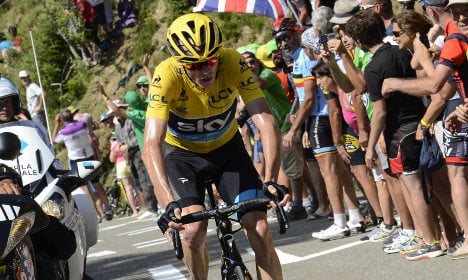 Chris Froome is once again shrouded in suspicion after crushing his rivals in France. Photo: AFP

Two years on from his scintillating victories at Ax 3 Domaines and Mont Ventoux, Chris Froome finds himself again in the eye of a storm of doping suspicions at the Tour de France.

Just as he did in 2013, the Kenyan-born Briton seemingly crushed his rivals' spirits with a stunning victory up to La Pierre-Saint Martin on Tuesday.

And with two more Pyrenean stages to come on Wednesday and Thursday, the 30-year-old could have killed off all semblance of suspense at the 2015 Tour before it even reaches the Alps, let alone Paris.

Predictably, after reigning champion Vincenzo Nibali and two-time former winner Alberto Contador floundered on the lower slopes of the 15km climb to Tuesday's finish, Froome had to field questions about his legitimacy.

All French news sites carried articles on the new suspicion around Froome, with some suggesting he had ruined a race that was designed to maintain the excitement until the very end.

“This was to be the show Tour. After a beautiful first week, there are no longer smiles in the Tour caravan, unless they are those of the Sky team. Suspicion has taken hold and the performance of Chris Froome has left everyone perplexed,” wrote BFM TV on Wednesday.

The site notes that no sooner has Froome crossed the finish line on Tuesday that “the ambiance around  the Tour and across France” had been subdued.

The 102nd Tour de France has been “killed” and the question needs to be asked whether it was genuine, BFM TV continued.

Former professional French cyclist Cyrille Guimard said Froome had “stunned everyone. He has killed the Tour. I don't see any interest in the general classification unless there's a fall or a positive drug test.” On Wednesday Froome announced that he will open himself up to independent physiological testing after the Tour in an attempt to clear the suspicion around him and counter the allegations.

Froome himself reacted with uncharacteristic frankness when asked at a tense press conference about doping following his success on Tuesday.

“I know I'm a clean rider, I've worked extremely hard to be in this position and I'm very proud of that,” he insisted.

“It doesn't make me angry, I know where the questions are coming from, I know the history of the Tour and the people that have gone before me.

“But at the same time there needs to be a level of respect. I've worked extremely hard to be here and I'm not going to let anyone take that away from me.”

He also found some defenders in the shape of former world champion Luc Leblanc, now a consultant on French TV and radio.

“It annoys me to hear people talking about doping every time someone puts on a performance like that,” Leblanc told BFM news channel.

“If it had been a French rider, no-one would have batted an eyelid.”

Leblanc, world road champion in 1994, himself admitted in 2000 following his retirement that he had taken the banned blood-booster EPO during his career.

Many in France took to Twitter to make light of Froome's domination over the rest of the Tour and the allegations of doping.

One tweeter joked that the cyclist's attack in Tuesday's stage had been claimed by Islmaist group Isis while another joked that he had dedicated the win to his favourite personal doctors, in a nod to the TV series Breaking Bad. (see tweet below)

The tale of Tuesday's stage also seems to suggest Froome is being treated unfairly.

While specialist climbers such as Nibali, Contador and French trio Jean-Christophe Peraud, Thibaut Pinot and Romain Bardet all cracked under the strain of the first high mountain stage of this year's race, modest climbers
such as Frenchmen Tony Gallopin and Pierre Rolland, and Froome's own teammate Geraint Thomas, lost just two minutes to the Sky leader.

On such a tough climb — 15.3km at an average 7.4 percent gradient — in baking hot weather, after a mostly fast, flat stage and following a rest day, which often knocks riders out of their rhythm, the gaps to the likes of
Gallopin and Thomas were if anything surprisingly small.

But the collapse of Froome's 'fantastic four' rivals — only Nairo Quintana managed to limit his losses to a single minute — seems to have conditioned the response of the sceptics, not least because of the curious episode of Sky's computers being hacked and Froome's training data stolen.

Sky manager Dave Brailsford believes that was done to try to prove Froome is cheating.

It means Froome will face increased scrutiny during Wednesday's 188km ride from Pau to Cauterets with the first category Col d'Aspin and the fearsome hors category Col du Tourmalet to overcome.

Unless Froome cracks spectacularly and lets his rivals back into the race, the doping suspicions will likely follow him all the way to Paris.