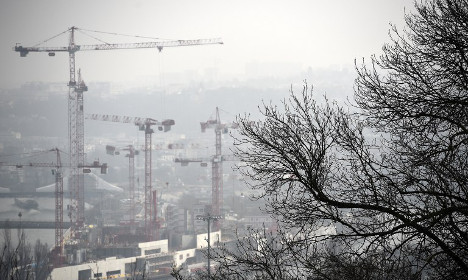 Pollution in Paris reached a peak in late March this year. Photo: AFP
France and particularly its capital Paris have suffered from worrying spikes in air pollution in recent years and the cost of the problem was laid bare in a Senate report published on Wednesday.
The report spearheaded by Senator Jean-François Husson found that the annual cost of air pollution was €101.3 billion a year, with the vast majority of that sum going towards healthcare.
Around 42,000 premature deaths each year are put down to France's high air pollution levels, according to the World Health Organization (WHO), not to mention the increase in the number of cancer victims and asthma and allergy sufferers.
Wednesday's report estimated that the annual cost of treating these people, together with the losses of an estimated 650,000 days of work absenteeism, is between €68 billion and €97 billion.
The study, which was carried out over four months and saw over 70 experts consulted, found that a further €4.3 billion was lost through poor crop yields, poor soil quality, and building degradation. It noted, for example, that the recent clean up of the Pantheon in Paris cost €900,000, over ten times the initial estimates. (Spot the Eiffel Tower. The view over Paris on March 18th, 2015. Photo: AFP)
The authors of the report singled out diesel cars as one of the primary causes of the pollution, suggesting that the best way to tackle the problem was to increase taxes on these vehicles.
Diesel cars release high levels of nitrogen oxide and fine particulates, which can measure less than 2.5 microns in diameter and can penetrate deep into the lungs and the blood system and can cause cancer.
The report also noted that a five-percent increase in pesticide use between 2009 and 2013 was a strong contributor to the country's unclean air.
Though the report noted past efforts to battle atmospheric pollution had lowered overall smog levels in France — especially around industrial sites — sources like ground transport and heating systems have made the problem more diffuse and present at higher levels in indoor air than before.
The study recommends a range of fiscal policies to encourage use of cleaner technologies, and measures to compliment incomplete or inefficient regulations already in place.
Pollution in Paris has already caused more than a few headaches this year, with the capital ranked as the most polluted city on earth on one day in March. The city's mayor responded by setting driving restrictions and offering free public transport.
Paris has also moved to ban certain trucks and coaches from the city centre if they are deemed to be polluting.
One study produced last year claimed that the air quality in Paris was so bad that it was the equivalent of being in a room with eight smokers.