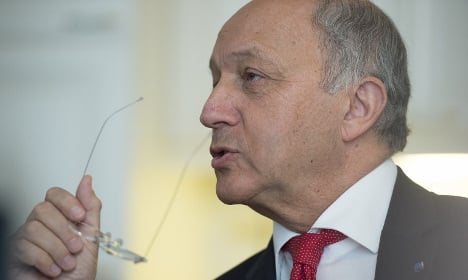 French Foreign Minister Laurent Fabius told French radio that he will head to Iran. Photo: AFP
Laurent Fabius said his Iranian counterpart Mohammad Javad Zarif had “reinvited” him as the deal was clinched on Tuesday.
“I told him I would go to Iran so I will go to Iran,” Fabius told French radio.
Fabius noted that French firms were “very well thought of” in Iran but denied the nuclear deal was struck with an eye on business.
“Trade is very important. It fosters growth. It's important for the Iranians, it's important for us,” he said.
“But when the president of the Republic (Francois Hollande) and I took the strategic decision (to agree to a deal) … we did not take it for commercial reasons, but for strategic reasons because we wanted to avoid nuclear proliferation,” stressed the minister.
France used to have a strong presence in Iran before the sanctions went into effect, with Peugeot and Renault being major players in the Iranian auto industry and energy giant Total heavily involved in the oil sector.
But two-way trade has fallen from four billion euros ($4.4 billion) in 2004 to just 500 million euros in 2013, according to French statistics.
The French employers' federation, MEDEF, is due to visit Iran in September to try to kickstart ties.
Some 107 representatives from the body travelled to Iran early last year, triggering anger in the US which said it was still too early to do business with Tehran.
But the 2014 visit came hot on the heels of delegations from Italy, Germany, Austria, Portugal and South Korea.