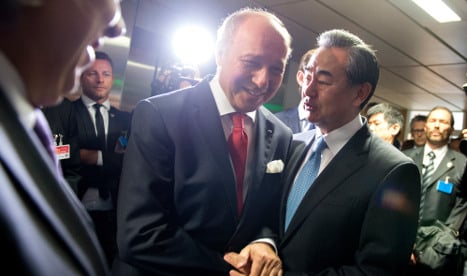 “A resolution will be very quickly presented to the UN Security Council… It's a matter of days,” said Laurent Fabius shortly after Iran and the so-called P5+1 countries officially announced the agreement, aimed at curbing Iran's nuclear programme in exchange for relief from painful economic sanctions.

The nuclear deal between Iran and major powers could “normalize” Tehran's international relations and even help resolve certain crises in the Middle East, France's foreign minister said on Tuesday.

“This is an historic deal in its aim and because it can help facilitate a normalization of Iran's international relations,” Laurent Fabius said, adding that he hoped it would “help a certain number of crises in which it (Iran) is directly or indirectly involved be resolved more easily.”

“It's a very important deal that was signed overnight, the world is making headway,” he said in his traditional annual televised interview on France's national day.

“Now that Iran will have bigger financial capabilities — as there will no longer be sanctions — we must be extremely vigilant on what Iran will be,” he added.

“Iran must show… that it is ready to help us on Syria to end this conflict.”

Elsewhere, the agreement was hailed by Iran and the European Union as a new chapter of hope for the world but branded a “historic mistake” by the Islamic republic's arch foe Israel.

“I think this is a sign of hope for the entire world and we all know this is very much needed in this time,” EU foreign policy chief Federica Mogherini said at the start of a final meeting to formally sign off on the accord.

“It is a decision that can open the way to a new chapter in international relations and show that diplomacy, coordination, cooperation can overcome decades of tensions and confrontation.”

“We are reaching an agreement that is not perfect for anybody but it is what we could accomplish and it is an important achievement for all of us,” he said. “We are starting a new chapter of hope.”