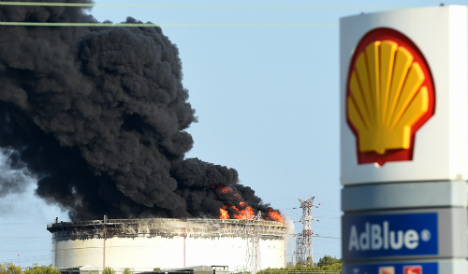 Police said no one was injured in the explosions that happened in Berre-l'Etang near Marseille-Marignane airport at 3.00am (0100 GMT).

“Two tanks 500 metres (yards) apart that are full of chemical products are affected (by the explosions),” said a source close to the case, who wished to remain anonymous.

A thick cloud of smoke emanating from the plant, which is operated by chemical firm LyondellBasell, was visible several kilometres away.

The company said the fire in one tank had already been put out while the blaze in the second vat was in the process of being extinguished.

One tank contains petrol, while another vat contains naphtha, a flammable liquid distilled from petroleum.

“A malicious act is a serious hypothesis,” said the source.

“The probability that these two fires in tanks 500 metres apart could be accidental is very low. Investigators are leaning towards the theory of a voluntary act,” another informed source said.

Police, gas masks hanging around their neck, set up road blocks to stop anyone from getting near the site, and more than 100 firemen were at the scene.