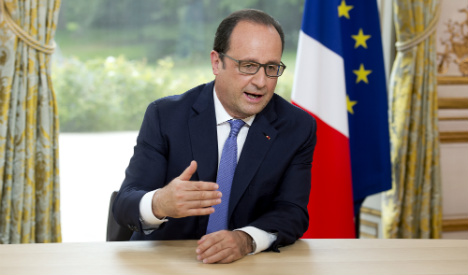 “I cannot accept that people be humiliated… Humiliation would have been to drive it (Greece) out of the eurozone,” he said in a televised interview on France's national day.

Hollande added that France would make proposals to strengthen Europe's economic governance following the drawn-out crisis that had many fearing Greece would be forced out of the eurozone.

He said that already Europe had created a banking union, devised to protect taxpayers from forking out public funds in case banks go bankrupt, and “budgetary discipline” had increased.

But he added that European countries had to go further and France and Germany would draw up proposals for better economic governance.

The outline deal thrashed out between the 19 eurozone nations calls for Greece to push through a range of reforms to secure a bailout worth up to €86 billion ($96 billion).

Without it, the country's economy will collapse.

Prime Minister Alexis Tsipras will have to rush through the Greek parliament key measures on tax hikes, pension reforms, and a debt repayment fund.

But many Greeks and European politicians have slammed the deal as a humiliation for the country, with some criticizing perceived bullying of Athens by Germany.