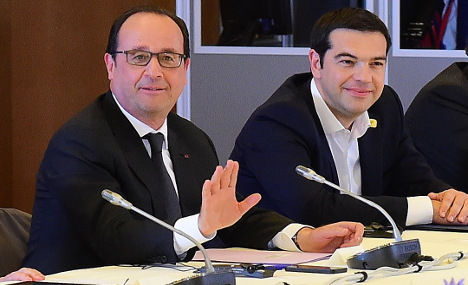 “Europe has won,” Hollande tweeted shortly after the deal was announced on Monday morning by the eurozone’s 19 leaders.

The compromise deal will force Greece to implement tough reforms and more austerity but should allow the cash-strapped country to remain in the single currency with creditors to agree to a third bailout.

The announcement of a deal represents something of a victory for Hollande himself, who, has been desperate to keep Greece in the eurozone unlike Germany, who seemed prepared to let the country slip out.

Hollande suggested on Monday that the compromise represented a victory for France, which had “sought it and wanted it”.

“An agreement has been found. France looked for it, wanted it. Greece will stay in the eurozone. Europe has won,” read the French president's tweet.

He commended the “courageous choice” of Greek Prime Minister Alexis Tsipras after he struck a reforms-for-bailout deal with the eurozone.

“Tsipras made a courageous choice at the same moment when he was asked for other reforms,” Hollande said after 17 hours of talks concluded in Brussels.

He said the parties had reached “a historic decision” that allowed Greece to stay in the eurozone, which included “restructuring of debt”.

The French president also said that helping Greece was in everyone’s interest, including that of France, by supporting measures for growth.

“The aim was also to respect European rules. That Greece could get aid that has been earmarked for countries in difficulty(…) Respecting the rules would also ensure that measures for growth can be taken.”

The deal will still have to be voted on national parliaments, including in Athens, where little more than a week ago the people voted against more austerity in a referendum.

Speaking on Monday after the deal had been reached Greek PM Tsipras said: “We've finally managed to arrive at a restructuring of our debts and a middle-term financing. We are leaving a legacy for the necessary changes in all of Europe, and we will fight to find our way back to growth and win back our lost national sovereignty.

“This is a message of democracy and self-determination we've sent to all of Europe.”