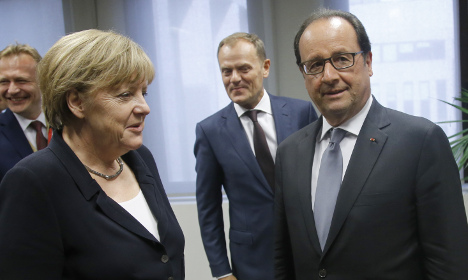 A deal may have been reached on Monday that would keep Greece in the eurozone but days of tense negotiations have opened up cracks in the Franco-German partnership that may take a while to repair.

The rift developed as Berlin pushed Greece to accept more and more austerity or face being kicked out of the eurozone.

While Germany clearly envisaged the possibility of a “Grexit” from the single currency, France has wanted to avoid it at all costs.

On Monday morning EU leaders announced that a deal had been reached that would pave the way for Greece to receive a new bailout and allow the country to remain in the eurozone. ALthough it must be passed by several national parliaments, including in Athens.

But even if the marathon negotiations prove to be fruitful and a compromise deal is reached the crisis over how to deal with Greece has opened up a divide between France and Germany- the bloc's two biggest economic powers.

On Monday the French PM Manuel Valls continued to press the French line, that a Grexit (Greece exit from eurozone) would be a disaster for both Greece and the eurozone.

“[It would be] a disaster first and foremost for the Greeks, who would live through an unprecedented social and economic shock, which will be even harsher than what they have lived through up to now.

“The consequences for the eurozone itself would be damaging because it would be weakened.”

But the Germans and their Chancellor Angel Merkel don't appear to see it that way.

There would be no agreement “at any price,” Merkel said Sunday at yet another eurozone summit, again taking a hard line in the troubled bailout talks between Greece and the other eurozone states.

Merkel pointed to a broad lack of trust in the hard-left government in Athens.

A little later, Hollande dismissed a temporary “Grexit” plan mulled by Germany and presented as an option in a draft document compiled by eurozone finance ministers.

The gap between Hollande and Merkel has widened since the surprise announcement by the Greek Prime Minister Alexis Tsipras to hold a referendum on July 5, which resulted in Greek voters firmly rejecting creditors' demands for more austerity.

Since then Germany toughened its stance in the negotiations with Athens on the country's bid for a new rescue package.

The discord now seems to have developed into a pattern as Merkel focuses on demanding that Greece respect eurozone rules and Hollande calls for compromise and European “solidarity”, while both pursue the goal of reaching an agreement.

The current rift between France and Germany, countries which for decades have underpinned the European project, is raising broader concerns.

“If Germany has ambitions of a 'Grexit,' it is going to provoke a deep conflict with France. That would be a disaster for Europe,” said Luxembourg Foreign Minister Jean Asselborn in an interview to appear Monday in the German daily Süddeutsche Zeitung.

The unpopular Hollande has sought to lead efforts to resolve the Greek crisis in order to burnish his political credentials two years before his term in office ends.

But in the last two weeks he has come under fire from not only his opposition who accuse him of having France break with Germany, but also from the radical left, who reproach him for yielding to Berlin.

On Monday left-wing firebrand Jean-Luc Mélenchon – dubbed the Tsipras of France – accused Germany of trying to “destroy Europe for the third time in history”.

While Mélenchon accepted the current crisis was hardly comparable to the two World Wars he said accused Germany of displaying the “same mindset, arrogance and blindness” as in the previous instances..

Former French prime minister Francois Fillon accused Hollande of having “played the troublemaker: rigorous in the company of Angela Merkel, but indulgent behind the scenes with Alexis Tsipras” in a bid to eclipse his “own economic, social and financial failures”.

“We need Hollande to get his act together and restore unity with German Chancellor (Angela) Merkel” said former president Nicolas Sarkozy, also in Brussels for a meeting of the centre-right European People's Party (EPP).

He accused his successor and rival of having dangled “a cheque without conditions” before Tsipras.

The gap has also widened between Hollande's French Socialists and the Social Democratic Party of Germany, whose leader and German vice-chancellor Sigmar Gabriel has stepped up his criticism of Athens.

Unlike Hollande, the risks at home are limited for Merkel, who faces pressure to stay firm on Greece and was described as the “Iron Chancellor” on Tuesday by tabloid newspaper Bild Zeitung.

Triumphantly re-elected in September 2013 for a third term, the chancellor has to contend with the hard-line conservatives in her camp, but so far they have always ended up falling in line.