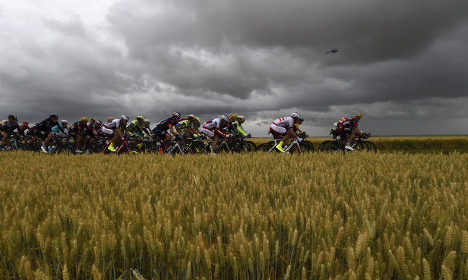 Italian Luca Paolini was withdrawn from the Tour by his Katusha team on Friday night after the International Cycling Union (UCI) informed the Russian outfit of the 38-year-old testing positive for cocaine.

It was the first doping case during the world's most prestigious cycling race since Frank Schleck returned a positive reading for a diuretic in 2012.

Katusha expressed their surprise by the result, which was given following Tuesday's fourth stage, as cocaine in itself is not a performance-enhancer.

If taken out of competition, it is not even a banned substance.

Katusha added in a statement: “According to the UCI Regulations the riderhas been provisionally suspended with immediate effect.”

The news somewhat overshadowed Mark Cavendish's first stage win in almost two years on the Tour and 26th in total, taking him into sole possession of third place on the all-time list behind five time Tour winners Eddy Merckx (34) and Bernard Hinault (28).

The 30-year-old's acceleration past Andre Greipel — who had triumphed in the previous two sprint finishes — was a timely reminder to his Etixx-Quick Step team of what the Manx Missile is capable.

His contract runs out at the end of this season.

“I've grown with this team, I'm really happy, you can see the ambiance we've got at Quick Step. I'd love to stay here, I really would,” said Cavendish.

Meanwhile, the 181.5km eighth stage from Rennes to Mur de Bretagne will see the return of the race leader's yellow jersey.

Chris Froome had declined the opportunity to wear it during Friday’s seventh stage as a mark of respect to Tony Martin, who would have been leading the race but for being forced out of the Tour with a broken collarbone from a crash on Thursday.

But Froome, the 2013 champion, said he will wear it on Saturday.

“It's a huge privilege to be in yellow, this is every cyclist's dream. I’m really, really happy to be in the yellow jersey,” said the 30-year-old, Kenyan-born Briton.

The Mur de Bretagne is longer than the Mur de Huy but not as steep — 2km at an average 6.9 percent gradient as opposed to 1.3km at 9.6 percent.

And Froome believes there will be some movement between the favourites.

“From what I understand, it's not going to be as selective as the Mur de Huy,” said the Team Sky leader.

“But we can certainly expect there to be small gaps.”