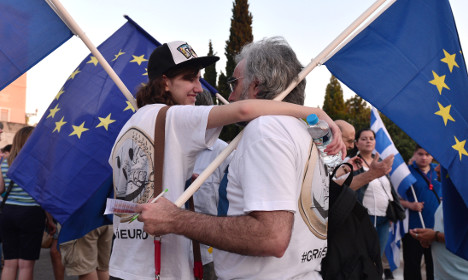 French President Francois Hollande on Friday welcomed the latest proposals from Athens on a fresh bailout plan as “serious and credible”.

“The Greeks have shown a determination to want to stay in the eurozone because the programme they are presenting is serious and credible,” Hollande said after Athens laid out details of a pensions overhaul and tax hikes in return for debt relief.

“They will submit it to parliament which will show the strength of their commitment and would says courage”.

“The coming hours will be important,” Hollande said, adding that “nothing is decided yet” as eurozone officials will study the details of the plan on Saturday before a summit of EU leaders the next day.

France's Economy Minister Emmanuel Macron also reacted positively to a reform plan that has been labelled a “Greek capitulation” by some.

Macron said on Friday he was “reasonably optimistic” on the possibility of the eurozone reaching an agreement with Greece, saying Athens has made “major advances” in its latest proposals.

“I believe that major advances have been made in the last few days,” said Macron in Madrid.

“The level of the reforms are in line with what was expected,” he said, adding that it made him “reasonably optimistic.”

And European Affairs Minister Harlem Desir told French radio “The proposals which have been put forward are all serious, credible and comprehensive”.

France has maintained a a conciliatory tone towards Greece throughout the crisis with Hollande doing his best to encourage a deal between Athens and its creditors.

While the French government reacted positively towards the new program of reforms, the response in Germany was far more sceptical.

“On Sunday they led a campaign in which they cursed everything which they have now presented [to the EU]. Will it all be implemented, or are these just promises?” Ralph Brinkhaus, deputy leader of the Christian Democratic Union (CDU) in the Bundestag told public broadcaster ZDF.

“I have very little trust in them. You could send Jean-Claude Junker an old newspaper with a signature on it and he'd say 'great, great great.' That's the reality at the moment.”

SEE ALSO: Why the French are easier on Greece than the Germans